2 Ways Which The Gamecocks Can Benefit From The Transfer Portal 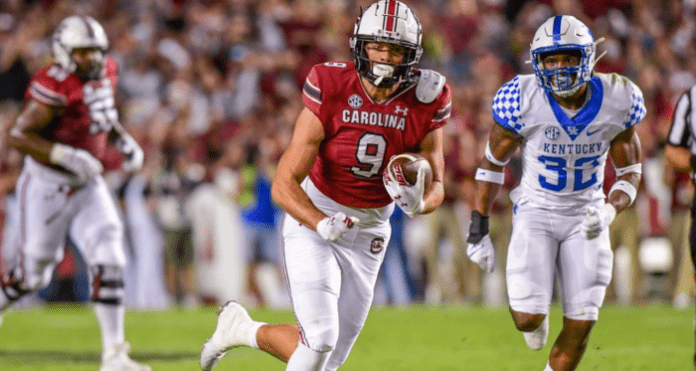 The final snap of regular season football for the South Carolina Gamecocks is now behind us, which means, it’s time for the team to focus on two main points, one being bowl eligibility and the other, who they can snatch up once the college football transfer portal opens up and gets going at full speed. If you look at South Carolina’s NCAAF stats this season, they weren’t as flashy and as promising as fans were expecting at the beginning of the season, but, with the guide of Shane Beamer as head coach in his first year, the results were very positive. After finishing fifth in the SEC East, they now await their fate as to which bowl will be hosting them at the end of the year and who they’ll be playing, something that was not necessarily in the books at the beginning of the season.

On a brighter note, some big names are already starting to be linked up with the Gamecocks football program as the college football player transfer portal is gearing up to get going. But now, thinking of what’s to come for next season, how can the Gamecocks take advantage of said transfer portal to give their team a much needed lift in quality? Let’s take a look.

I think we can all agree that Lincoln Riley’s move from Oklahoma to USC was one that caught the whole world of college football by surprise. While Riley strayed away from the rumors that were leading him to the LSU head coaching gig, in a move that came totally out of the blue, the former Sooners coach decided to move out west to coach the USC Trojans, one of the most prestigious college football programs in the nation, and one of the most coveted head coaching jobs in NCAA football. But now, in all honesty, how does that affect the South Carolina Gamecocks?

It’s not a secret to anyone that the faith in coach Beamer at the beginning of the season wasn’t necessarily the highest around. Many analysts and experts saw the Gamecocks finishing with 3 wins tops, making for another disappointing year in South Carolina, but then coach Beamer got to work and made the Gamecocks a rather enjoyable team to watch with serious signs of future potential. That and the fact that he has a strong past with the Oklahoma Sooners have helped fuel the rumors that coach Beamer might be at the top of the list of new candidates to take over the Sooners head coaching gig.

Beamer is a man that is known all around in Oklahoma, he knows the system, the school, the players and in his one year as head coach for South Carolina, he has managed to impress the right people. So what does South Carolina need to do to keep coach Beamer safe and happy with the Gamecocks? Easy, let him and his staff take full control of what’s to come for the team, especially when it comes to the transfer portal signings, allowing the coach to bring in players of his liking so that he is fully able to form new schemes and strategies that can put the program over next season. Funnily enough, one of those players that could really help SC and who could benefit greatly from coach Beamer is mentioned right below.

Offensively speaking, the Gamecocks showed certain promise throughout the season, but their three options at QB were lukewarm at best. Luke Doty, Colten Gauthier and Jason Brown are all set to come back for the 2022 season, but at the end of the day, if the Gamecocks want to really move up in the pecking order of the SEC, they need a proven leader at the QB position and that’s where someone like former Sooners QB Spencer Rattler might fit in just perfectly.

Rattler started his season out firing on all cylinders with even talks of a potential Heisman Trophy win as a sure bet, especially after being pitted as the favorite to win the award according to experts all around. Sadly, his season saw Rattler hit a low from which he couldn’t really recover, losing the starting position against teammate Caleb Williams who took it and has not looked back whatsoever. Now that Rattler has hit the transfer portal and with him and coach Beamer already knowing each other from Beamer’s time as offensive assistant at Oklahoma, this could be a pairing that could mean a serious boost in quality for a team looking to continue building on their initial success under coach Beamer’s tenure.

If you look at Rattler’s stats in the two seasons he’s played college football, he already amasses more passing yards and touchdowns than the three Gamecocks quarterbacks do, together. At the end of the day, coach Beamer and the Gamecocks could really use a lift in the QB department and Rattler is in dire need of finding a top-grade program in which he can restart his career and start firing on all cylinders again, especially if there are aspirations of mapping out a career in the pros. The next few months will be crucial for both South Carolina and Rattler, but from what it seems, this looks like a best choice scenario for all parties involved.