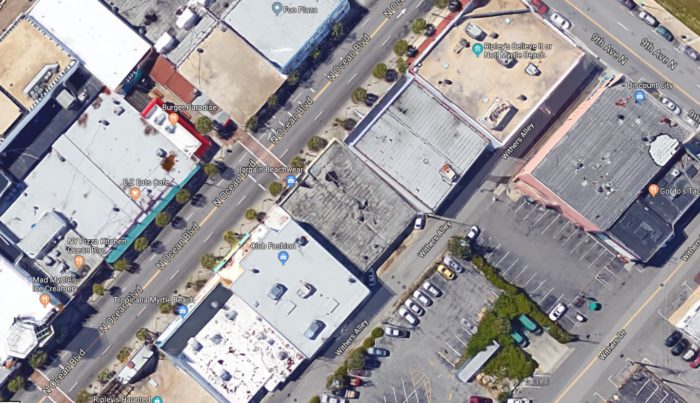 In 2017,  an entire core group of elected city leaders were swept out of power.  Of the four who held city office, only one candidate remained, City Councilman Mike Lowder.  A key reason given by city voters for the change was those leaders’ attempt to use eminent domain in shutting down an entire section of the city called the Super Block.

In 2018, a more subtle, but highly effective tactic appears now to be employed.  In hushed, quasi-government circles the term is rarely spoken out loud.  The term is called Business Profiling.  City owned “Not For Profits”, like the Myrtle Beach Downtown Redevelopment Corporation (DRC), have now been questioned, along with the Myrtle Beach City Manager, as to if these tactics are being employed in 2018.

The reason we have questioned the city is an email that was leaked to MyrtleBeachSC.com just last week: 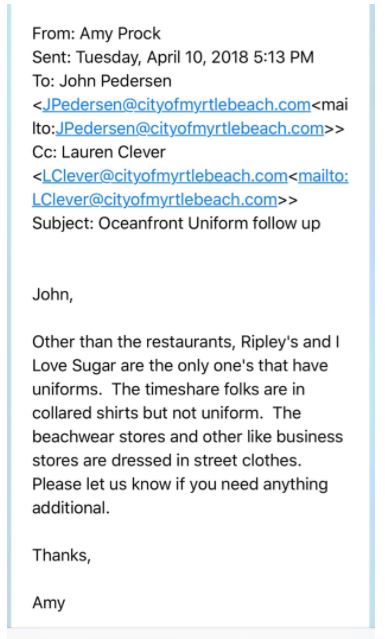 The email was sent from the Myrtle Beach Police Chief, Amy Prock, to Myrtle Beach City Administrator, John Pedersen, and the DRC Executive Director, Lauren Clever.  Since our article of last week, the business employees along Ocean Boulevard, are now being asked to wear identification lanyards, instead of the city’s previous request that the employees wear uniforms.  In exchange, the city promises not to put barricades in front of their businesses Summer 2018. 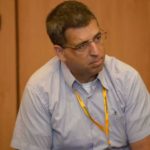 Urban Renewal,  when done correctly, is legal.  Business Profiling by city leaders is not.    In its study of urban renewal, Urbanjustice.org  concluded: “Moreover, the government has the power of the state that it can bring down on private property owners via the threat of force through police, fire, and other city agencies that can close businesses and cause a diminished value in private property.“

Many of the building owners in these areas are finding it difficult to lease their properties or sell them because of actions taken by the city of Myrtle Beach including zoning restrictions, barricades, and now dress requirements.

City Manager, John Pedersen emailed MyrtleBeachSC.com  and told us the “bargain” he made between the city and these businesses is not enforceable.  Therefore, it is also not legal.  However,  there is this issue of the alternative for those merchants –  the barricades. 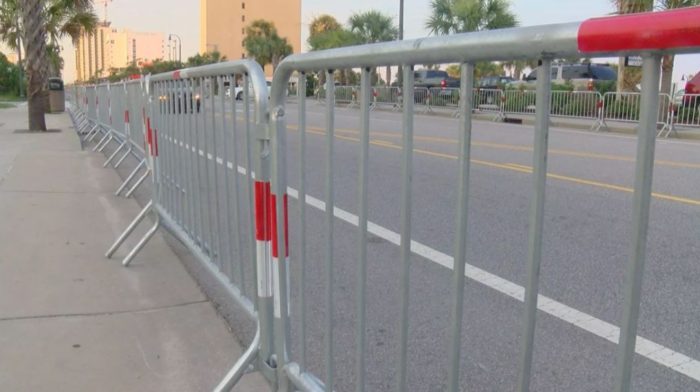 Barricades or Lanyards?  Merchants are given a choice

While the city can not force the merchant employees to wear lanyards, it can, (for any explained reasons it chooses), put the barricades back up if the lanyards are not worn.

The Mayor of Myrtle Beach, Brenda Bethune, reached out to us on social media, explaining that our last article was out of context.   We then emailed her a list of questions for clarification.  While the Mayor did not respond,  City Manager John Pedersen did:

Pedersen wrote, “Since this whole string of emails came about as a result of a request that I made of the Police Chief, please allow me to address your questions below.”:

2.  Is there some form of line authority for the police department in reporting to the DRC?

John Pedersen:  No.  It clearly would be inappropriate for the Police Chief to report to the DRC Director, but that is not the case.

Mr. Pedersen did not explain to us why the Police Chief was sending an email reporting to the DRC executive [see email above].

3. MyrtleBeachSC.com  Why is the city applying a “uniform code” only for merchants on Ocean Boulevard?

John Pedersen:  I believe we have a clear mandate from City Council and from our residents to improve both the reality and perception of crime in our downtown.  I also believe that from your previous blogs this is a direction that you support as well.  It is true that we have asked the merchants to have their employees wear a “uniform” by which we meant a consistent look that distinguished the employees from the customers.  This helps us when our officers have to respond to an incident in or adjacent to one of the stores.  Incidentally, we are also asking the merchants to allow us to provide “eyes, and ears” training for these employees as well.  The idea is that everyone work together to help achieve the mutually desirable goal of improving the perception and reality of downtown safety.

4. MyrtleBeachSC.com  Merchants now tell us the city is asking their employees to only wear identifying lanyards. This change was requested since our publish date.

John Pedersen:  This was a change requested by the merchants.  As this accomplishes the original goal of helping to distinguish staff from customers, I thought that this was a very reasonable compromise and agreed in the spirit of working together.

5. MyrtleBeachSC.com Regardless, why are only Ocean Blvd businesses required to wear lanyards when this request is not being made of Coastal Grand Mall businesses, Broadway at the Beach businesses, Seaboard Street businesses, Market Common businesses, City Customer Service office staff, or any other businesses in retail city-wide?

John Pedersen: You are correct in that we have not made this same request at other locations.  If your belief is that we need to treat each area exactly the same, then I guess you have a point.  But applying that belief consistently that would also mean that we would provide the same level of resources to each area regardless of location or the unique underlying issues with those locations.  In this case that would mean that instead of having roughly 75 officers working that area on a Saturday Night in the season that we would have about 5 instead.  The City has chosen instead to deploy resources based on what we perceive to be the needs of the residents, property-owners, business owners, and guests in each area.  In this case the City is deploying an extremely high level of public resources to accomplish what again is a mutually desirable goal.  I do not regard asking the merchants to contribute to that effort by having their employees wear an identifying lanyard to be unreasonable.

6. MyrtleBeachSC.com Why is the City of Myrtle Beach negotiating non-binding agreements with one particular business owner, Larry Bond, on behalf of the entire downtown merchant group?

John Pedersen: Mr. Bond has clearly taken the initiative to get involved in the effort to improve the area, has worked with his fellow downtown merchants and has brought us what we consider to be workable ideas.  I promise that if others do the same and present workable ideas, we will give them equal consideration.  Telling us that there is a problem and that we need to do something about it is useful in and of itself, but it is not a solution.

7. On whose authority is [business owner] Larry Bond operating?

John Pedersen:  We do not require anyone to be “authorized” to make good suggestions.  In fact the City and DRC solicits them from anyone and everyone.  Evidence of this are the several open forums that we have held to discuss improvements in the downtown.  My recollection is that at the December collaborative meeting that you actually complimented the City and the DRC for that open dialogue, which we have since repeated on numerous occasions.

8. If the uniform code is non enforceable, as Mr. Pedersen has told our team, why is the Chief Of Police inspecting to verify that merchants are complying to this code?

John Pedersen:  I felt that I addressed that issue before in my initial response to your email on this matter, but I will try again.  I was curious as to whether or not the level of cooperation we are seeking with the downtown merchants is actually being realized.  I could have taken another City employee off a different task to go downtown to walk through the area to tell me, or I could ask a group of employees that is already assigned to the area to do so.  As I stated beforehand this is not a law enforcement issue.  Our request is simply that, a request.  We cannot and will not enforce it through our Police.  There is nothing more to that.

MyrtleBeachSC.com reached out to downtown business owner Larry Bond.  Mr. Bond is among the brightest and best entrepreneurs in Myrtle Beach.  His restaurants Art Burger and The Chemist are among the most celebrated and are favorites on and around Ocean Boulevard.  He is excellent at his craft.  Said Bond, “I was very concerned about having barricades around my businesses this Summer.  It would have put me out of business. I was and am willing to do whatever is necessary to ensure that the barricades are not put up in 2018.“

Every merchant we spoke with stated (off the record) that having the police inspect this supposed “bargain” was nothing more than a form of intimidation by the city.

As to the other merchants on Ocean Boulevard in Myrtle Beach,  they have reluctantly agreed to wear the lanyards for now, even though the city can not “legally” punish them if they do not.  However, there is always still the option of putting up barricades should the city see fit.