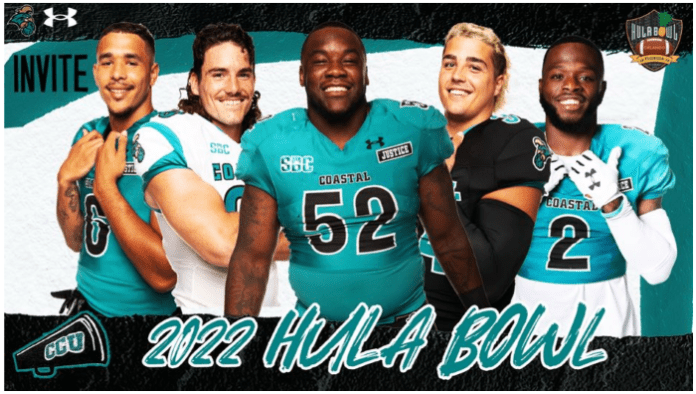 CCU had a total of five players invited to the 2022 Hula Bowl, which will be played this year on Sunday, Jan. 15, at the Bounce House on the campus of UCF in Orlando, Fla.

Brewer has totaled 30.0 tackles this season, including 4.5 tackles-for-loss and 2.5 sacks from his defensive tackle position. A second-year co-captain and leader up front for the Chants, he also has five quarterback hurries, one interception, and one fumble recovery. In the win over the Troy Trojans on Oct. 28, Brewer ran a fake punt for 12 yards for a first down to help secure the win for the Chants.

As of early November, Brewer recorded 206 total tackles in his career at CCU. He also ranks fifth in CCU’s career record book in sacks with 14.0, seventh in assisted tackles with 126, eighth in tackles-for-loss with 27.5, and is third in quarterback hurries with 19.

Kelly leads the team with 58.0 tackles on the year, including 26 solo tackles, 3.5 tackles-for-loss, 1.5 sacks, two quarterback hurries, and one pass breakup. He has recorded a season-high 10 tackles twice this year, coming in wins at Buffalo and versus Troy.

Fellow linebacker and co-captain, Gallagher is second on the team this season with 51 tackles and 22 solo stops. He also has 5.5 tackles-for-loss, 2.0 sacks, four quarterback hurries, and forced a fumble in the contest at Appalachian State.

Over his four years at CCU, he ranks fifth in the career annals with 268 total tackles and fifth in assisted tackles with 135. He also ranks ninth in solo tackles with 133 and just outside of the top-10 in program history in tackles-for-loss with 20.0.

Heiligh made history in the win over Troy on Oct. 28, as he recorded his 10th career 100-yard receiving game, the most in CCU history. This season, the senior wideout leads the team with 40 receptions for a team-high 792 yards and five touchdowns. He is averaging 19.8 yards per catch and ranks among the leaders in the Sun Belt in receiving yards, receptions, and receiving yards per game this season.

Overall, he ranks third all-time in pass receptions in CCU history with 165 and is just 18 catches away from tying the all-time leader Matt Hazel and his 183 receptions. Heiligh also ranks third in career receiving yards at CCU with 2,489 and is fourth in receiving touchdowns with 20 for his four-year career at Coastal.

In just two seasons at CCU, Strong has made an impact on the field for the Chants. Arguably the best coverage defensive back in the Sun Belt over the last two years, the 2020 Sun Belt Newcomer of the Year has totaled 15 tackles this season, including 12 solo tackles, to go along with a team-high seven pass breakups.

The Hula Bowl was established in 1946 as the Hula Bowl All-Star Football Classic game. When the inaugural game was played on Jan. 5, 1947, the teams were composed of mainland college players versus a local Hawaiian Islands team; primarily made up of graduates of Leilehua High School in Wahiawa, Hawaii. The teams played a two-game series every January until 1951. It was then, that the format was changed to allow NFL players to join the Hawaiian All-Stars in an effort to create a more competitive game.

Starting in 1960, the Hula Bowl game was established as an All-Star game that would only invite NCAA college players from schools across the US. The teams were divided into two teams, one team from those colleges located in the Eastern and Western United States. The teams were then split into “Aina and Kai ” teams, the Hawaiian words for Land and Water.