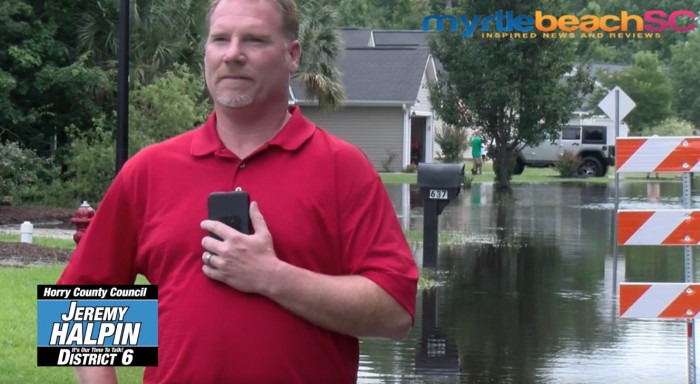 Jeremy Halpin waded through three feet of water today to speak with a group of flooded and trapped residents who live at Lawson’s Landing.

Afterwards, Halpin spoke with the press. He explained that his boss terminated him, after he posted a video on his Facebook campaign page yesterday. Until yesterday, Halpin worked as a local mortgage broker. Today, he is looking for a job.

For the past 20 years, an endorsement from the Coastal Carolina Association of Realtors (CCAR) was a guaranteed ticket into elected office.

Not so in Surfside Beach last Fall, however. Three city council candidates swept into office over those most recommended by CCAR.

Candidate Jeremy Halpin, who works in the real estate business as a mortgage broker, was not endorsed.

Afterwards, CCAR made a call to his district supervisor, which caused Jeremy Halpin to be fired.

Halpin speaks to the press

MyrtleBeachSC News asked Halpin if he thought CCAR was too influential in Horry County elections. He said yes.

We asked him if he knew what he knew today, would he still choose to run for office? Halpin said he would.

Halpin said he was proud to fight for flooded families who live in District 6.

Flooding is an issue that Halpin is passionate about. He stated he was determined to do something about it, if elected, on behalf of the residents who live in District 6.

Said Halpin, “Working for residents, fixing these flood issues is what I believe is critical. I can always find another job.”