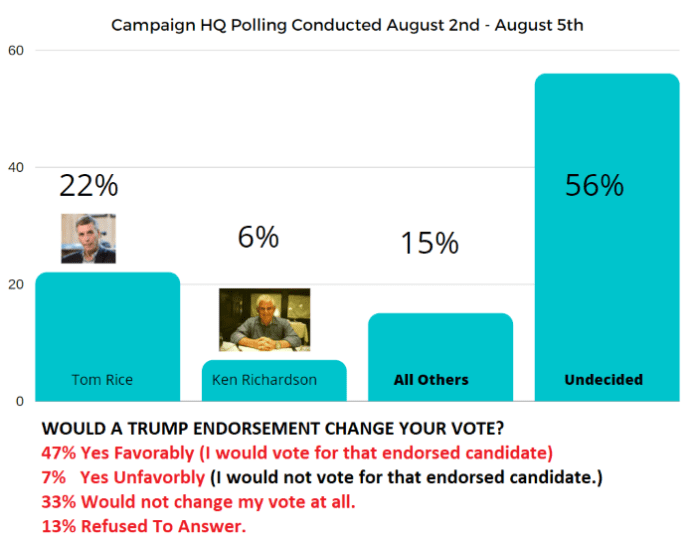 As we approach the dog days of August, heading into Fall, MyrtleBeachSC News wanted to see where the U.S. 7th Congressional District race stood today.

Afterwards, multiple Republican candidates chose to throw their collective hats into the ring as primary challengers.

With national media attention on the race, MyrtleBeachSC News chose to hire professionally respected CampaignHQ to run our poll.

The poll was conducted Monday August 2nd through Thursday August 5th. The poll has a standard deviation of +/- 3.5%.

In 1999, CampaignHQ was founded with the mission of helping Iowa Republican candidates. In 2007, CampaignHQ became a national firm, expanding outside of Iowa.

The criteria for candidates considered were:

Candidates Who Qualified For this Poll

Using that criteria, the following candidates qualified to be considered in this poll.

RICE HAS A 22% LIKELY CEILING

Polling data for this group shows that as of August 5th Tom Rice stands at 22% of the vote. Rice was first elected to office in 2013.

These are troubling numbers for an 8 year incumbent. Long standing incumbents with less than 30% of the vote this far out, generally struggle. Rice’s numbers are upside down.

These numbers are unlikely to change despite whatever funds Tom manages to raise. The bulk of Tom’s latest fundraising successes are happening outside of South Carolina and outside of the 7th District.

Diminishing local fundraising results, inside District 7, should cause him concerns.

An email sent out by Tom’s wife shortly after Rice’s vote to impeach, should also cause concerns for the incumbent.

An email obtained and published by National File exposed that the congressman’s wife described residents of the 7th District as “Trump Cult Followers” and compared Trump to Adolph Hitler.

That email has now been widely circulated and will likely become another hurdle for the incumbent to clear.

Horry County School Board Chairman Ken Richardson came in second with 6% of the vote.

Rice and Richardson are the only two candidates in this race that have previously run county-wide races.

In his previous 2018 county-wide race for Horry County School Board Chairman, Richardson garnered 98.5 of the vote with 82,891 votes.

In 2004, then Myrtle Beach Mayor Mark McBride ran for the Republican nomination of the S.C. Senate but was considered a longshot. He lost in that election.

The 2020 school year presented great challenges for Chairman Richardson. Chiefly among those issues was dealing with SCDHEC, government mandates, and all things covid.

Long time Horry County School Board members Sherrie Todd and David Cox have both called Richardson the best school board chairman in the history of Horry County.

During the pandemic, Richardson was uniquely qualified to navigate the challenges that have never previously been presented to any former School Board Chairman. His ability to build coalitions, work through a team construct, and not compromise on his own values in that process set Richardson apart.

Richardson was willing to confront different activist groups head on, stating that Critical Race Theory would not be taught in Horry County Schools.

Richardson stepped up and led when others cowered in the face of entrenched activists, as well as, media pressure.

Once Richardson stepped forward, public sentiment clearly shifted in Richardson’s favor. His approach has now been embraced by S.C. Governor Henry McMaster, as well as, conservative leaders across the nation.

With 85,000 local voters as a support base, Richardson is one of the few candidates that could help S.C. Governor Henry McMaster win a victory over Democrat challenger Joe Cunningham in the 2022 general election.

Richardson has made it clear that he and the governor hold many of the same principles in common. Richardson told MyrtleBeachSC News, he would offer such support, if the governor asked.

Undecided voters make up the largest block of those polled. While Rice and Richardson lead, undecided voters at 56% show the race is still out there to be won by any candidate.

The surprising results from the poll, however, was that only 47% stated they would change their vote if former President Donald Trump endorsed a particular candidate.

7% stated that they would not vote for any candidate supported by Trump.

While 33% said that a Trump endorsement would not change their vote at all.

A Trump endorsement appears to be a net neutral. This number will certainly not change over the next 10 months.

All of the remaining candidates combined were only able to garner 15% of the vote collectively.

S.C. State Representative Stephen Goldfinch was not included in the poll as he has not officially made it clear whether he is running for Lt. Governor, 15th Circuit Solicitor, 34th District S.C. Senate, or for U.S. 7th.

Should he ultimately decide to throw his hat into the ring, Goldfinch’s entrance could impact these numbers. However, at this time, Goldfinch is in high transition, leaving his law partner on what locals have termed a tense separation.

Goldfinch did hold a fundraiser on August 5th for his 34th District S.C. Senate Campaign. At the end of the day, Goldfinch may simply decide to remain a S.C. Senator from District 34.