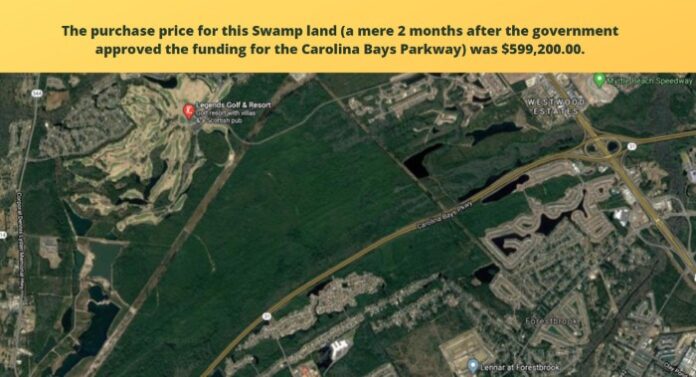 RIDE 1, RIDE 2, and RIDE 3 are commonly known road taxes in Horry County. RIDE is an acronym that stands for Ride Improvement & Development Effort.

As Charleston’s POST AND COURIER reported yesterday: The city of Myrtle Beach and Horry County are trying to find middle ground on the future of a 1.5 percent fee on hotels and lodging in all parts of the county. More than $40 million in revenue and the future of the area’s first interstate (I-73) could be on the line.

A mediated settlement, of a lawsuit filed by the City of Myrtle Beach, is expected next week with both sides coming out smiling.

FOR A BIG FLIP TO HAPPEN

For a big flip to happen, an area needs:

Today we give you the history and discuss the genesis of these purchases.

PART 2 – Nothing But the Facts

This is pulled from Wikipedia.

The stuff in bold is my doing to accentuate the important names and dates.

The road that would eventually become Carolina Bays Parkway was planned as early as 1989 by then-U.S. Representative Robin Tallon.

The following year, the Carolina Bays Parkway Task Force was established to help develop a plan for how the road would be built. The 1991 Intermodal Surface Transportation Efficiency Act was passed to allow the road to receive $9.6 million in federal funding as part of Corridor 5.

In March 1996, voters in Horry County defeated a measure that would have levied a 1 percent sales tax countywide to pay for future road infrastructure in the Myrtle Beach area, including what would be a bypass to alleviate traffic problems in Myrtle Beach and the future Carolina Forest development. South Carolina Governor David Beasley created a local task force in May 1996 to determine short-term and long-term goals for the greater Grand Strand. The concept that came out of the rejection of the sales tax increase would be called “Plan B.” The commission set up became what is currently known as the Road Improvement and Development Effort, or RIDE, headed by Gary Loftus, a former highway commissioner.

When the Carolina Bays Parkway Task Force finished up its proposals on September 11, 1996, it asked for South Carolina to pay for $20 million per year in RIDE road projects and $15 million per year from the 1.5 percent proposed hospitality tax. The northern third of the parkway would
be funded in a larger $550 million program. The following month, (October 1996) Horry County Council approved the hospitality tax for “Plan B” in an 8–3 vote.

In 1993, the proposed route through South Carolina followed US 1 and US 52 to Florence, with 73 miles of new road in Marion and Horry Counties, and following US 17 from North Myrtle Beach to Charleston.

When I-73 crossed a border between two states, the federal law authorizing the road required that the two states agree that their sections meet. Originally, both Carolinas selected a route running south from Rockingham, North Carolina. However, North Carolina had more money to spend on roads, and on May 10, 1995, the U.S. Senate Environment and Public Works Committee approved North Carolina’s plan for I-73 to run eastward to the coast and enter South Carolina at North Myrtle Beach.

Later that year, officials in both states agreed that I-73 would enter South Carolina south of Rockingham and that the other highway would be I-74. This raised the possibility of I-73 bypassing the Myrtle Beach area entirely, since I-74 would run to the Myrtle Beach area.

In May 1997, signs went up declaring the “Future Corridor” in Bennettsville, Marion, Conway and Charleston. At this point, the highway was expected to run 122 miles, 67 of which were already four lanes. The route included US 1, SC 9, SC 38 and US 501, with a planned Conway bypass connecting to US 701, along which the highway would connect with US 17 on the way to Charleston.

At one point South Carolina intended to have stop lights and driveways on I-73, but the National Highway System Designation Act, passed in 1995, required I-73 to be built to interstate standards. Residents of McClellanville on US 17 protested, and alternative routes would bypass Georgetown, leading to the possibility of Myrtle Beach also being bypassed. People in Georgetown, wanting the highway to serve their port, asked that I-73 end in their community, but federal law still said Charleston would be the terminus.

In 1998, Rep. Mark Sanford introduced an amendment to the Transportation Equity Act for the 21st Century (TEA-21) that changed the southern terminus of I-73 to Georgetown. However, the section between Myrtle Beach and Georgetown would not be part of I-73; instead, it would be a “high-priority corridor” along US 701.

That same year, the SCDOT Commission endorsed a plan that would link Interstate 73 from Georgetown through Conway, Marion, Bennettsville, and Wallace, to the North Carolina state line. In February, 2002, the South Carolina government changed the southern terminus from Georgetown to Briarcliffe Acres (the eastern terminus of SC 22).

In 2003, SCDOT went through a series of public meetings and came up with five routes:

In late 2003, the state decided to go with option three and started environmental impact studies in 2004.

That was a lot to read about roads in South Carolina, but it is important to understand this boring stuff before we dive into the good stuff.

One more note on the background. In 1988, SC Senators Thurmond and Hollings expanded the boundaries of the Congaree National Park by 22,000 acres. They wanted more land, but the one of the owners was reluctant to sell. By 2003, ownership of one of the wanted parcels had changed hands, and the new owner was willing to sell to the US Government. Thus, the park was expanded by another 4576 acres.

On December 20, 1996, a man named Carroll Lee Walker purchased a property in Richland County from Georgia Pacific [the “Congaree Tract”].

Do you know what a straw buyer is? Look it up.

In the first transaction [the “Legends Tract”], GCREC purchased 1712 acres of undeveloped land (about half of which is swamp land according to the Horry County GIS). The purchase price for this land (a mere 2 months after the government approved the funding for the Carolina Bays Parkway) was $599,200.00.

Simple math tells us that the purchase price per acre was $350.00 per acre.

So who is GC Real Estate Corporation anyways?

According to the South Carolina Secretary of State, it is a dissolved Virginia Corporation. Let’s look at the information available.

Who else uses that address? A company called CCA Industries and another called Riverstone Properties, LLC.

There are two sister companies, Riverstone Properties II, LLC (formed 2/12/2001) and Riverstone Properties III, LLC (formed 9/01/2003). All based at the same address in Richmond where CCA Industries and GC Real Estate Corporation is/was located. No reason to think they are not the same entity. Especially when you see how these properties went
through the exact same turnover on the exact same days.

With regards to the Congaree Tract, the Buist Tract and the Legends Tract, they were all converted to Riverstone Properties in the same convoluted way on the same days.

First, these properties were absorbed into Riverstone Properties II, LLC on 12/21/2000.

Got that? Good. Now to cut to the wick, the man behind Riverstone Properties, GC Real Estate Corporation, and CCA Industries is named William H. Goodwin, Jr.

He owns Kiawah Island. Not just a house on Kiawah.

He also owns the Sea Pines Club on Hilton Head.

He is a former Rector of the University of Virginia and a certified billionaire.

His peculiar ability to purchase the right swamp land at the right time, 100% of the time, is why I call him Mr. Swampy.

We will continue to discuss Mr. Swampy tomorrow. .