Can we please just wall off The City of Myrtle Beach? 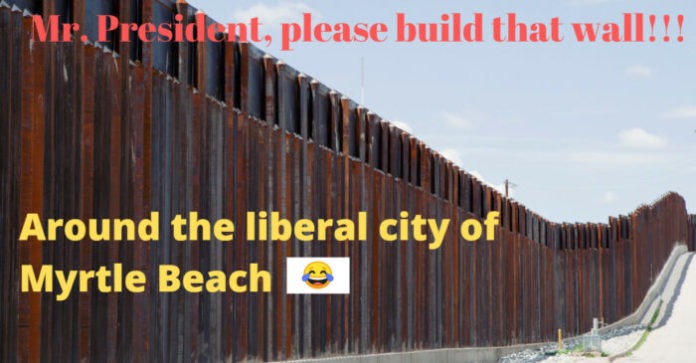 The two conservative candidates lost dismally to all Democrats running.

STAY IN YOUR LANE MYRTLE BEACH!

However, Horry County is a conservative county. The problem with Myrtle Beach is the heavily tax funded, liberally lead city continues to have a huge influence in how Horry County runs.

You can’t blame the City of Myrtle Beach. The town has run Horry County for over 40 years.

The news of the Hospitality Fee settlement, which we covered here

is concerning because of a $7 million dollar legal bill sent over for 8 months of negotiated work.

IN THE SETTLEMENT, HOW MUCH OF I-73 DOES THE CITY OF MYRTLE BEACH EXPECT HORRY COUNTY RESIDENTS TO PAY FOR?

What is even more troubling is news we dropped yesterday.

City of Myrtle Beach monied leaders are leveraging the good name of a tax payer funded institution to legitimize their own self created industry watchdog. The development industry is funding the Institute for Responsible Development – Coastal Carolina University think tank. This is just another heavily funded misinformation institute brought to you by the City of Myrtle Beach elites.

Can we build a wall around the City of Myrtle Beach, please?

When it comes to grass, turf, and soil maintenance, expert counsel recommended