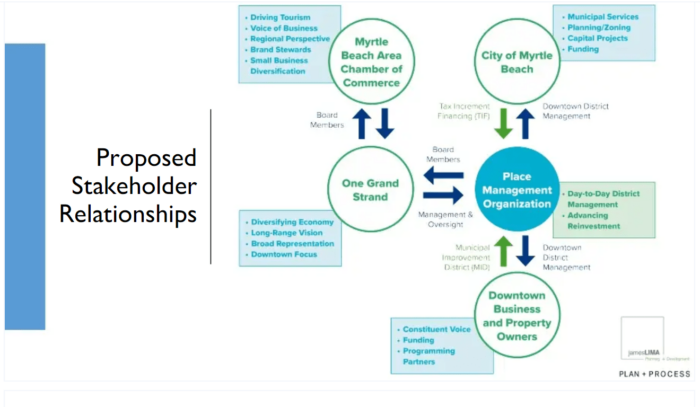 It is an entirely new day and a new era in the City of Myrtle Beach.

Not only was the framework approved, but the $258 million funding mechanisms of a TIF and a MID were also unanimously voted for.

Existing downtown Myrtle Beach businesses are now operating under the auspices of this new plan.

The plan will be funded by $258 million dollars of authorized new debt and new taxes to pay for that debt.

The two key funding sources for the plan include a Municipal Improvement District tax and Tax Increment Financing.

A Municipal Improvement District (MID) is a geographic area in which property owners (generally, excluding owner-occupied residences) agree to be assessed for supplemental services to improve the district.

The Plan places the Myrtle Beach Area Chamber and the City of Myrtle Beach at the top of the plan’s organization chart. Just below are One Grand Strand and a new Place Management Organization.

The role of Place Management will be day to day district management of the Myrtle Beach business community, along with, advancing reinvestment.

At the very bottom of the organizational chart are existing business owners.

The primary role of existing businesses will be to collect the MID and TIF taxes and pass those along to the organization as a whole.

Businesses in the district will vote to approve the MID. Sources we spoke with stated that the votes needed were already in place.