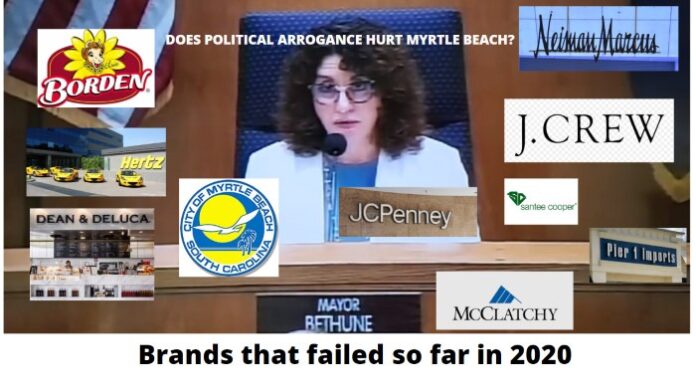 Scores of big name brands filed for bankruptcy in the Spring of 2020. Among those are Bordon Dairy, Nieman Marcus, Hertz Car Rental, Dean and Deluca Grocers, J Crew, McClatchy News, and Pier 1 Imports.

All of the big name failures, mentioned above, can point directly to the Coronavirus as playing a key role in their demise.

While the City of Myrtle Beach is not among those filing for bankruptcy, the town’s two week launch beginning May 15th, can only be considered a colossal brand failure.

Barricades on the Blvd.

One key reason business owners point out in regards to the town’s demise is city government arrogance, coupled with, denial of the “true root” of the problem.

Mayor Brenda Bethune, Police Chief Amy Prock, and City Councilmen alike talked down to residents yesterday, while dismissing tourist concerns. Local resident, Joe McVay, was thrown out of the city council meeting for asking the police chief to turn her mic up.

On the video above, Mayor Bethune says the holiday weekend was ‘the most peaceful and calm she has ever seen’ despite shootings.

WHAT IF GANGS ARE NOT COMING FOR VACATION?

One consideration which seems to have completely alluded city government is why are these gangs showing up every weekend in Myrtle Beach?

What if these rival gangs are coming to do business in Myrtle Beach?

What if these “self described” Crips, Bloods and MS13 gangs have territorial sales areas within the city, where they have “gang rights” to sell drugs to the clientele Myrtle Beach attracts?

What happens when a Crip sells drugs in a Blood’s territory?

Those on video flash cash and use gang signs. How did Myrtle Beach Police Chief Amy Prock miss this?

Did she? No mention of this at the City Council meeting nor to the press.

Tourists looking for this atmosphere must be present for drug dealers to make large sums of money. The Myrtle Beach Area Chamber has infamously attracted this type of tourist weekend after weekend.

The Myrtle Beach Area Chamber of Commerce is tax payer funded $50 million annually to promote the City of Myrtle Beach.

As it relates to crime, city management continually compares the city to the areas of St. Louis, Detroit, and Chicago.

The city never compares itself to the beaches of North Myrtle Beach, Surfside Beach, Garden City Beach and Pawleys Island.

North Myrtle Beach, Surfside Beach, Garden City Beach and Pawleys Island are considered the safest beaches in America. The City of Myrtle Beach is rated as one of the most dangerous cities in the state.