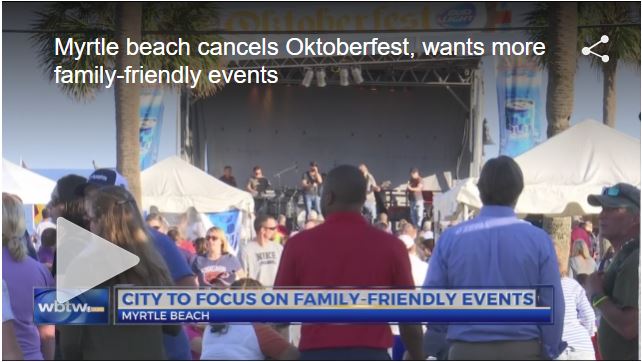 A private/public concern called the DRC,  Downtown Redevelopment Corporation,  has taken the leadership role in planning future downtown Myrtle Beach events.   Yet,  even while a transition to the DRC  is just getting off the ground local residents weigh free parking issues that may lead to a lawsuit against the city of Myrtle Beach.

The DRC,  the Mayor, and city council are publicly tied in a high profile way to this now controversial paid parking issue.  As such,  some local residents weigh free parking lawsuits against the city.

Oktoberfest,  an event previously planned by the Oceanfront Merchants Association,  has been cancelled by the city.  The Downtown Redevelopment Corporation will now be planning events including a Seafood Festival this October 15th.

THE PROBLEM WITH THE DRC?

The Downtown  Redevelopment Corporation is a semi-private,  semi-public corporation that gets its revenues from PARKING FEES paid in the downtown areas,  including the recently added Golden Mile parking fees.  Several business leaders we spoke with privately said they felt the group was simply a parking fee funded arm of Burroughs & Chapin Company.  Burroughs & Chapin is the largest land owner in the city of Myrtle Beach.

PAID PARKING HAS UPSET THE COUNTY AND CITY MERCHANTS

Businesses downtown,  like Burkey’s Grill,  have already addressed the city of Myrtle Beach about how the new parking fees have cut revenues by as much as half.    Residents from Carolina Forest, Loris, Socastee, Aynor, Conway, Green Sea, and even Murrells Inlet are now opting out of day trips to the downtown area.   Merchants are already feeling the pinch.

MyrtleBeachSC.com reached out to Horry County residents of several different stripes and occupations.   We wanted to see if they would be willing to support an October Seafood festival.   The area of Carolina Forest alone is already larger than the city of Myrtle Beach and could double the size of Myrtle Beach in just a few short years.   City merchants have expressed to us that they see these future customers as vital to their operations. 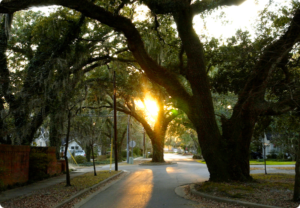 “Foolish, ridiculous decisions are being made in Myrtle Beach. When will we take back OUR CITY !”  said Rick Tebbs, a Conway resident.  Tebbs is  the Director of Circle of Life Cat Sanctuary in Conway SC

“Please inform the City of Myrtle Beach that our family and friends are in full boycott of the city.  We will go into the city only for bare essentials that we cannot get anywhere else.  We will conduct our business elsewhere and visit other beaches on a permanent basis.  It makes no difference to us what the season is, we will avoid the city whenever possible until the parking restrictions are  lifted and the free parking is returned to Ocean Boulevard.”     Yours truly,   Philip A. Shore, D.M.D.  Carolina Forest Community

“I would love to join these events BUT REF– — — USE TO until free parking for the beach including on Ocean Blvd is reinstated  to PRE July 1 2016 standards, until then Myrtle Beach City restaurants and merchants are dead to me. Until the city council becomes a good neighbor they can go pound salt, ”  Rich Malzone,  Resident Carolina Forest Community

“Somebody tell me what a DRC is?  And why am I paying parking fees so that this organization can exist?  Beach Access parking should be Free!!!   If paid parking is such a great  idea,  tell Burroughs and Chapin to charge for it at Broadway at the Beach!  Don’t they own the DRC?   Or tell the city to charge for parking at Market Common!   I am told the DRC is supposed to be about downtown development anyway.  Why are they hijacking the role of the Oceanfront Merchants?   Why should I pay for parking so that an unaccountable quasi governmental  agency can plan fall events and charge me  parking for the privilege?, “  Veril Anderson,   Horry County/Greater Aynor area resident.

The DRC,  the Mayor, and city council are publicly tied in a high profile way to this now controversial paid parking issue.  As such,  some local residents are now weighing suing the city over the paid parking fees city wide.

Said JJ Iagulli, AP Government Teacher and We The People Coordinator,  “Although a lawsuit is not always the best means to a solution, because it can have unintended consequences, it is encouraging to see other groups as passionate about this issue as my students have been. I hope that the courts can correctly find the balance between the city’s right to manage property and the public’s right to access the beach, which is a historic right that has its origins in English Common Law and the original Colonial Charters.”