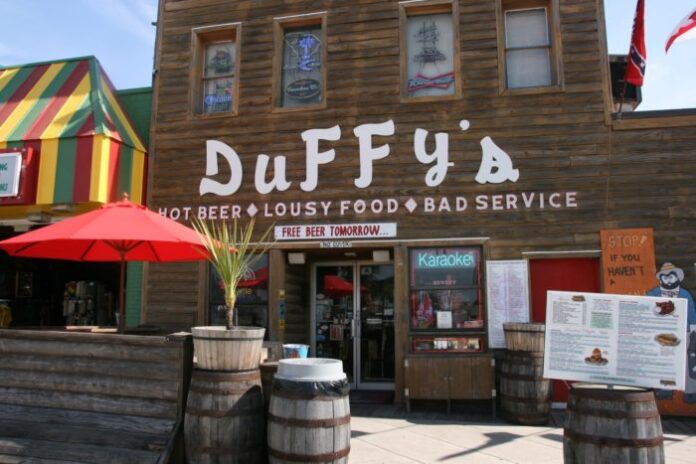 MB Night Clubs believe City Government May Be Targeting Them.

Last week Myrtle Beach City Council took a first reading on a law that would require MB Night Clubs and bar owners to keep their  doors open to entry during all hours of operations.  City Attorney Tom Ellenburg stated the current fire code requires egress (allowing guests to leave) but not access (allowing guests to enter).

City Manager John Pedersen reported in the bi-weekly workshop he felt that this was a serious safety concern.  He said that the patrons needed access and egress.  Pederson stated he had only spoken with two bar owners about the matter to date.  Councilman Lowder said he wanted a first reading on the new ordinance immediately that day. Mayor Rhodes asked Pedersen to speak with a larger group of more owners before a second reading was held.

Over a dozen area managers of MB Night Clubs and bars attended the workshop.  Several commented as to why this safety issue should only apply to their businesses?

All  local MB Night Clubs are required by law to have an exit bar on each door that allows patrons to exit.

St. George Bar owner George Kley addressed council at the meeting, “If it is a safety issue, I don’t have a problem with it.  If it [the access law] is a safety issue, it really doesn’t just belong under liqueur.  It should apply to everybody.  If safety is an issue,  it is an issue for everybody.”   Hektor Melendez, another local bar owner, said,  “The bank closes at 5,  the bank locks the door,  but patrons are still inside.”

City Attorney Ellenburg stated, “The problem that was brought to me was that the police were not given access to certain clubs with the idea when they came to do a safety check they (bar owners) were given a leading at night.  And they indicated that that really interferes with their function,  providing code inspections or walk throughs.   So yes, this is a targeted law.”

Bar owners we spoke with said they felt this targeted law was more a matter of city harassment.

George Kley, who owns St. George’s Bar told MyrtleBeachSC.com, “There are about 300 bars in Myrtle Beach, S.C. The last time the city said anything,  the city said there are less than 20 bars they are having issues with.  I would like to see greater enforcement.  We don’t need any [new] laws.   Concerning the requirements of not locking a bar’s doors,  once the bar is full,  Kley added, “There is a capacity law.  The fire department comes in and says you can have so many people in your place.  That’s a capacity issue.  You have to maintain that for safety. So that is on the bar owner.  I don’t believe, though, that this is a safety issue.  I think this is when the city has come in late at night it is not about safety.  I think it is about policing and looking for violations.  So I prefer the city say we are targeting violations, and this is what we want.  Then that law belongs where it is.  Because I said that law should be the same for everybody.   When  a restaurant or something closes its doors and doesn’t let anybody in because they are full,  that violates the law they are passing on the liqueur people.”

It is unclear if the access law the city of Myrtle Beach wishes to pass is constitutional.  We asked a group of over 12  MB Night Clubs  and bar owners,  if they would (as a group) collectively challenge the law,  should it pass.   The group is now hoping to work with  the city to avoid a legal concern.

Shai David, an outspoken business man and a responsible property owner who leases area bars stated:  “Public safety should always be the number one concern for city officials, as long as, those concerns are based on extended research, true facts, and actual statistics, rather than opinions, biases, prejudices, and feelings.”
Shai added, “When city officials speak of public safety, they need to remember that our business and property owners are part of the general public as well and they too, need the city’s protection and assistance, especially those businesses operating in areas that have been neglected and forgotten by the city like the super-block and the 5 points.
It is so unfortunate that city officials continue to adopt the ‘us-against-them’ attitude when it comes to many small businesses in the city, instead of adopting a ‘one-for-all and all-for-one’ approach. By doing so, city officials not only alienate business and property owners, but also the patrons of those businesses, and future investors. Simply put, people don’t like to witness city officials flex their muscles against members of the community, just because they can.”
“One of the greatest thing about our country is our Constitution. It was purposefully designed to protect the weak from the powerful and created a system where temporary fears and occasional fads are not the basis for public policy.   My heart goes out when I see our city officials trying to pass rules and ordinances and use city resources, like the police and fire departments and construction services, as tools to intimidate and harass people who simply wish to make an honest living. I have always believed in the quote that said “With great power comes great responsibility;” I hope our city officials will start using their power to mentor, help, guide, and be overall stewards of the community. True public servants should always lead and not rule, they should use compassion and love in their decision making rather than hatred and disgust, and always, always, search for ways to unite rather than divide.
Being a business owner in Myrtle Beach isn’t easy due to a multitude of factors; I can tell you that from personal experience. Having to worry about city officials constantly adding to that stress is an unnecessary burden that can and should be avoided,” he said.

To date, I have not met a single business owner who would refuse to cooperate with city demands and requests, again, as long as, those requests are made with good faith intentions, are being asked first and not told, and most importantly, are transparent and open.   Adding items to a council meeting agenda in the last minute, holding important/controversial meetings in a room that can accommodate no more than the council members themselves, not allowing anyone to speak or allocate minimal time, making meetings’ attendees stand for hours outside in the hallway next to the restrooms without even chairs, not using a microphone so the public can hear what’s being said, and giving all guests and community members an overall feeling that they are not welcome in this “private gathering”, causes people to lose faith in our city government, lose the will to be a productive part of our community, and saddest of all, lose hope.
Moreover, publicly admitting that city officials are creating targeted laws and ordinances is in my opinion the equivalent of saying “we are not only fine with discrimination, but we encourage it.” This is not right, this is not fair, and this is very un-American.   The day I, as a public servant, feel so removed and so out-of-touch with the needs of the very people I swore to protect and guide, should be my last day in office,” David said in closing.