Could A Suspicious Sale With Deceptive Escrow Provide A Path To A Clemmons Judgeship? 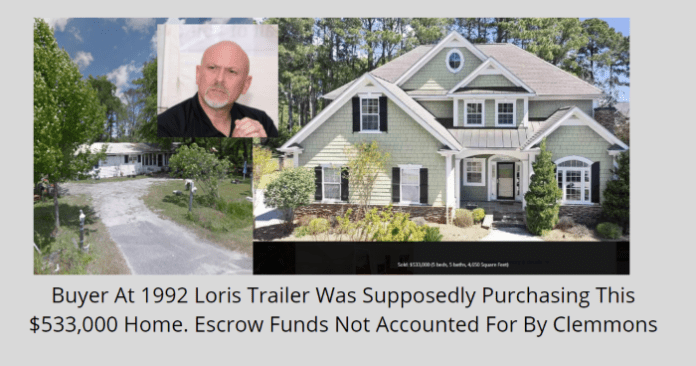 In November 2019, Horry County politicos were all abuzz about a potential contender who was considering a run against District 33 Incumbent Luke Rankin.

Select members of the community reached out to John Gallman begging him to consider a run. Mid-November Gallman quietly made his decision to run. It was an open secret in all political circles.

At the time, Gallman owned two homes locally. He decided to put his home located at 3981 Lark Hill Drive up for sale. His plan was use the funds from that sale to help finance his campaign account. The home was listed at a sale price of $545,000.00

In short order, Gallman’s listing agent, among the best on the beach, was approached by Myrtle Beach Realtor Melanie Hellmer. Hellmer informed the agent that she had a solid client willing to sign an immediate contract.

The contract on the home was signed by Gallman and the buyer. Clemmons law confirmed that $5,000 in escrow had been deposited to secure the contract.

Over the process of the purchase, Hellmer asked for 30 day extensions two different times. These extensions tied up Mr. Gallman’s monies and kept him from applying the sales proceeds into his campaign account.

What? The Check Bounced In November? Why weren’t we told?

In March, after the home had been tied up for 90 days, Gallman’s realtor sent the following email to Helmer and her team.

WAS THERE EVER AN NSF CHECK WRITTEN?

The supposed buyer of the home was Lee Hemingway of Hemingway Construction, LLC. Hemingway is in fact a handyman that does remodeling and light maintenance repairs. Sources in the Loris area told us that Hemingway does outstanding work.

They also stated that he did a good deal of repair work for Melanie Helmer during this time period.

Hemingway incorporated his business on December 18, 2019. This was just 3 days before the first contract extension. Articles of State Incorporation can be viewed at the bottom of this page.

Hemingway’s corporate address (from which the purchase emanated) is listed at 736 Hemingway Road in Loris, S.C.

We found a trailer home there purchased by Lee Hemingway in 1992. The home is listed on the Horry County GIS property map as having no real value.

One of the questions we asked ourselves was: How does a man operating out of a trailer home with no equity purchase a $545,000 home?

LORIS RESIDENTS SAY NOT LIKE HEMINGWAY TO WRITE A BAD CHECK

We attempted several times to contact Lee Hemingway. We were unsuccessful. However, the Hemingways are well known generationally in the Loris, S.C. area.

Sources in Loris said it was not in Hemingway’s nature to write a $5,000 bad check. Under S.C. State Law, writing such a check is a felony.

Breach of Contract Did Hellmer and Clemmons knowingly and intentionally commit fraud?

If Hemingway did write the bad check, the contract was null and void in November. Why wasn’t Gallman notified by Hellmer or Clemmons?

Gallman could have put his home back on the market immediately.

Did Hellmer and Clemmons knowingly and intentionally commit fraud?

Since the NSF check is now in dispute as having ever existed, we reached out to Clemmons Law asking them to produce a copy of the bad check.

We Ask Clemmons Law To Produce The Check

Myrtle Beach Mayor Says “I am a victim of Domestic Violence”. Calls Gallman a wife beater.

Said Helmer’s business associate Mayor Brenda Bethune, “… I am a survivor of Domestic Violence…. As someone who is looked at as a leader in this community, I can not support and will not support anyone who can beat their wife and who can not even have a relationship with their children because of their character.“

We would ask those officials to look into this matter before awarding Clemmons a position that will pay him $189,000 annually. It will also allow him to retire in 5 years at that salary. The total lifetime value of this appointment to Clemmons is approximately $4 million.

REACHED OUT TO GALLMAN

We reached out to Melanie Hellmer, Heather Ammons Crawford, Tim McGinnis, Luke Rankin, and Stephen Goldfinch in preparing this article. None chose to respond.

We also reached out to John Gallman.

After everything he and his family endured over the past 18 months, Gallman chose to respond as follows:

“For our boasting is this: the testimony of our conscience that we conducted ourselves in the world in simplicity and godly sincerity, not with fleshly wisdom but by the grace of God, and more abundantly toward you.”

We found this passage in 1st Corinthians verse 1:12. These were the words written by the Apostle Paul after years of being imprisoned, and now facing a soon execution.