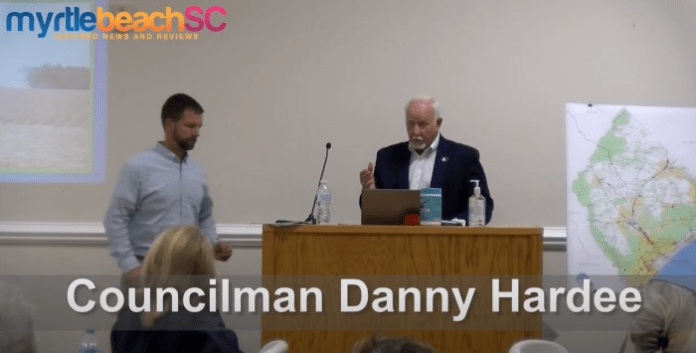 Councilmen Gary Loftus, Orton Bellamy, Al Allen, and Mark Causey were each in the room, yet none corrected Mr. Hardee as those statements were made.

It was only after the Charleston Post & Courier fact checked the matter that Planning and Zoning Director David Jordan admitted the statements were not true.

STATEMENTS MADE BY HARDEE WERE UNTRUE, YET NOT CORRECTED BY 4 OTHER COUNCILMEN IN THE ROOM

As the Post and Courier reports: Danny Hardee, who represents residents as east as S.C. 90 to the northwestern portion of the county where Horry touches Marion County, wasn’t clear if he opposed the Anderson project but said development is coming to the area either way.

If the county council doesn’t rezone the property, Anderson could still develop under current zoning so Hardee showed residents what those options could look like: 50 mobile homes or 71 single-family homes on the property.

But Hardee was incorrect and Planning Director David Jordan [later] corrected him stating only 40 single-family homes, along with the mobile homes could be built under current zoning.

“It’s going to happen,” Hardee said of the Anderson project. “I can’t tell (Anderson he) cannot do anything.”

OTHER MIS-STATEMENTS BY HARDEE

In the video above, Hardee begins by discussing traffic study numbers. Members of the group “Saving Rural Horry” were quick to point out that these numbers were off as well.

POSTED ON SAVING RURAL HORRY: Fact Checking Hardee 3.0 – Just after discussing the impact fees, Danny Hardee mentioned the traffic on Red Bluff Rd. Starts about 2:10.30 of Tuesday nights meeting. He stated that DOT goes by population and population only on the traffic studies, not actual traffic counts. He doesn’t like it and doesn’t think its fair. He said our tourists can’t be counted in traffic studies since they’re not part of the population and this traffic was out of our control and an issue of the state legislature. SCDOT does in FACT use traffic counters to track Annual Average Daily Traffic (AADT).SCDOT has a mapping site that you can see past traffic count studies. These studies are based on traffic counters placed at certain sites. These are the black cords that we run over time to time that are stretched across the highway. There are even 170 Continuous Count Stations (CCS) used across the state. These are permanently installed sensors in the roadway that can give hourly traffic counts. The counters track the number of single unit (cars) and combo units (trucks with trailers).The data from these counters can be seen at the following links. https://scdot.maps.arcgis.com/apps/MapSeries/index.html…https://scdottrafficdata.drakewell.com/publicmultinodemap…

The community at Saving Rural Horry is now working hard to set the record straight.

Horry County Council will have a second reading on two developments at the next council meeting.

The G3 Development and the Anderson development each passed first reading.