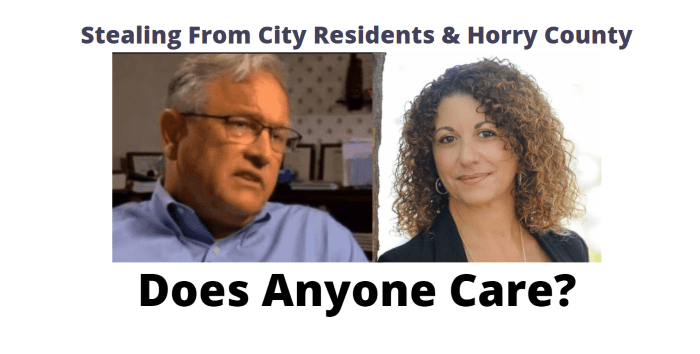 A lis pending has been attached to both campgrounds, notifying the Perry family, as well as, John Springs (the Ponderosa Group) that the titles of the properties are in question.

The 145 acre sale of Lakewood Camping Resort and PirateLand Family Camping Resort was never put out for bids. Putting the property out for bids would have certainly created a competitive bidding process, driving up the sale price.

Any Myrtle Beach area homeowner would allow buyers to compete for the sale of his or her home.

By privately negotiating only with the current lease holders, City Manager John Pedersen, Myrtle Beach City Council, and Mayor Bethune artificially kept the purchase price low. This will cost city tax payers as much as from $20 million to $40 million.

The price was privately negotiated at a $60 million city financed sale. This after the city’s evaluation of the 145 oceanfront acres came in at $76 million and the lease holder’s evaluation came in at an incredibly low $46 million.

Appraisers we spoke with stated the land could be valued as high as $1 million per acre. This would make the sale price $145 million.

The sale of the campground will terminate $2.7 million annually paid by the lease holders that goes directly to the Myrtle Beach Airport.

The sale also does not meet the city’s legal obligations to Horry County. All indications are that the City of Myrtle Beach fully intends on keeping the monies from the sale for themselves. City Manager John Pedersen stated,  “We believe the current [75% lease payment to the county – 25% to the city] split does not apply to proceeds of the sale.”

“The sole purpose of the money generated from [the properties] is to support the airport,” Horry County Council Chairman Gardner told MyHorryNews. “If that is sold and that money goes somewhere else, it won’t be supporting the airport.”

In 1948 the deed to the property from the U.S. Government was given to the city on condition of the 1953 final release from the federal government that states the release of properties “are expressly premised on agreement that these properties are intended for the use and benefit of the airport”.

The exact language of the 1953 release states:  “wherein the city obligates itself to ‘utilize any revenue derived from the use, lease, or disposition’ of the properties for the benefit of the airport.”

These conditions were signed off on by the city of Myrtle Beach in 1953.

This will be Horry County’s second lawsuit over missing monies.

Horry County Schools is currently in a lawsuit with the city over $20 million collected by the city for a county school in Market Common. Those funds have gone missing.

A Supreme Court appointed judge recently sided with the county over a Hospitality Lawsuit in which the city wanted to use $6 million in monies to pay their attorneys. The judge said no. The city of Myrtle Beach has appealed this decision.

In court documents written by deputy county attorney Randy Haldi on Friday, the upcoming action will focus on the “rights and obligations of the parties.”

INSIDER PRIVATE NEGOTIATIONS – WHY NOT PRIVATELY DISCUSS THIS?

These private meetings certainly kept the bid price for the land artificially low.

Why would the city of Myrtle Beach not also sit down with Horry County and privately work out where the proceeds of these funds should go?

Indications are, should this deal go through, the lack of funding for the Myrtle Beach Airport could cause it to operationally be at risk.

Upon hearing of the lawsuit today, downtown city business man Tuvia Wilkes said, “The city of Myrtle Beach does whatever it wants.    If they get by with it,  ‘great’ .  If they get caught ,  ‘so what’, city taxpayers will pay for any amount of bad behavior.     They can’t go to jail, because, well just because … and they know it.     Hence the nickname crookedest little city in the south.“

Added Wilkes, “While the county is preparing  for yet, another lawsuit….    The city has already moved on to their next scam…“

Former Mayor Calls For Stopping The Sale Of Campgrounds