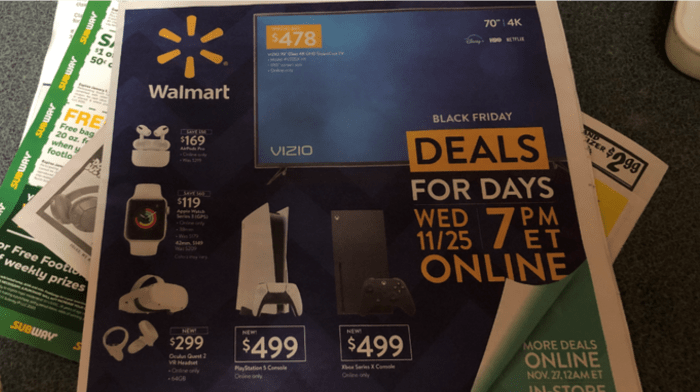 Shoppers are already noticing the savings to be had on what’s traditionally the biggest deals day are not limited to just Nov. 27 in 2020.

“You’re not going to see the barn-burner, door-buster type of deals that haven’t already been available,” he added.

Stores across America are following Covid capacity protocol. Packed stores are a no no.

The Centers for Disease Control and Prevention, in fact, considers shopping in crowded stores “just before, on, or after Thanksgiving” a higher-risk activity.

Many major retailers have already started Black Friday deals, extending savings events at stores for the entire month of November.

As Boston.com reported: Target launched its “Black Friday Now” deals on Nov. 1, which will run through Saturday.

“Our completely new approach to Black Friday is giving guests flexibility to safely get the best holiday deals on their own terms,” Christina Hennington, executive vice president and chief merchandising officer, said in a statement this week.

At Walmart, the “Black Friday Deals for Days” campaign offered shoppers savings at three different events over the course of the month. The final of the three began online Wednesday, with new deals hitting stores at 5 a.m. on Friday.

“We’ve been very thoughtful as we planned this year’s event. By spreading deals out across multiple days and making our hottest deals available online, we expect the Black Friday experience in our stores will be safer and more manageable for both our customers and our associates,” Walmart Executive Vice President and Chief Merchandising Officer Scott McCall said in a statement.

WINNERS AND LOSERS IN HORRY COUNTY

In 2020, small business owners were hit hardest by covid protocol forced on local retailers by SCDHEC and S.C. Government.

Black Friday, the once biggest retail shopping day of the year, will only accelerate that misery.

While shoppers will visit the local Target store, Walmart, Lowes Home Improvement, and local chain grocer, the chances they will later visit the local bar or restaurant to celebrate the season is less likely.

Logans is one such brand. On April 4, 2020, Craftworks announced that all the Logan’s Roadhouse locations would remain closed indefinitely, and that all 18,000 employees would be laid off. On June 12, 2020, SPB Hospitality purchased Craftworks restaurants out of bankruptcy for $93 million. Logan’s Roadhouse restaurants are now re-opened, however business remains mixed.

Covid also forced the Golden Corral Buffet & Grill to temporarily shut all of its locations. On March 25, 2020, Golden Corral said it closed all 35 company-operated restaurants and furloughed 2,290 employees because of the COVID-19 pandemic. The restaurants have re-opened with strict covid protocol. “It is truly an emotional and challenging time for our country,” Golden Corral CEO Lance Trenary said. “The realities of the current situation have forced us to make difficult decisions.”  The buffet chain has been heavily advertising its takeout service via network TV ever since.

MyrtleBeachSC News spoke with staff at Red Lobster. We can report that numbers at that location will be considered once the New Year begins.

In South Carolina, SCDHEC was unprepared for the pandemic. By order of SCDHEC bureaucrats, everyone was practically forced into at home quarantine.

Until Summer 2020, not enough test kits were available to document who was and who was not infected. Despite being paid $300 million annually by S.C. taxpayers, these bureaucrats were caught completely flatfooted.

Neither the Board Chairman nor the Director have been replaced, yet this bureaucratic agency is in charge of all “live and die” decisions concerning commerce (CAPITALISM) in the state.

Dr. Duwve’s infighting with Governor McMaster is well documented. Yet McMaster deferred to her and her team ongoing, calling them, “the experts on the ground.“

In New York, television stations across the city reported the following: New Restrictions Go Into Effect in NYC

In response, the same restrictions placed on parts of Brooklyn and Queens last month have led to protests and lawsuits from religious institutions; one establishment on Staten Island has declared itself an “autonomous zone,” saying it will defy the governor’s latest order.

“We refused to abide by any rules and regulations put forth by the Mayor of NYC and Governor of NY State,” Mac’s Public House said on social media last week. “Every day small businesses are living in fear, not just of this virus, but that our governments will take our livelihoods away, even as we’re being safe. Just to clarify, we acknowledge this virus as a real threat and are still taking necessary precautions. What we do not acknowledge is that our government has the right to shut us down when we’re operating in a safe manner.”

Indoor dining and gyms across New York City and the state could close in the next week or two, the Mayor Bill DeBlasio and N.Y Governor Guomo warned, as the latest yellow and orange zone restrictions took effect in parts of the city and neighboring suburbs yesterday.

Most all northern states and cities are now enforcing some form of covid protocol.

As our news group continually reminds readers, there are no conservative bureaucrats. The bureaucratic state increasingly controls, manages, and affects the choices everyday S.C. residents are allowed to make.