Late last November,  a local business owner,  Natalie Litsey reached out to our news team.  She stated she was having a hard time getting her side of a downtown issue aired on local T.V. 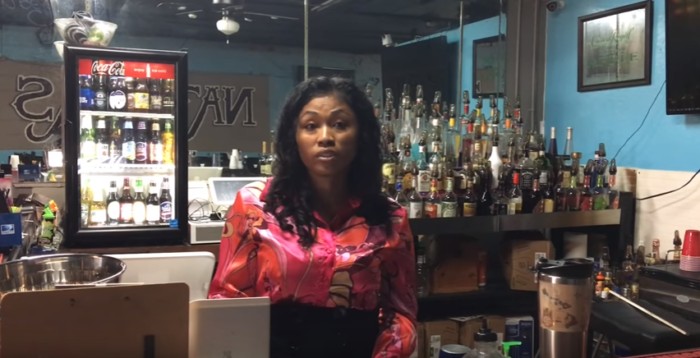 Owner Had Business License Taken By City.  Claims City Council Shut Her Down Under False Pretenses

According to Ms. Litsey, the Myrtle Beach police were nightly going into her Bar and Grill, harassing her guests, and asking what they were drinking. [see her story at the link here] Scores of police cars would park along her store front every night with blue lights flashing for hours,  arresting no one,  but scaring off any “would be potential patrons” of her establishment.

Our news team showed up at her property and got her statement on camera.  She informed us of a coming meeting with city hall,  where she said she would plead to keep her business license.  I told her that my wife and I would pray about that meeting.

Ms. Litsey had served in the U.S. Military for over 20 years.  At her retirement, she sunk her entire $300,000.00 savings into a Bar & Grill located in the historic Superblock of Myrtle Beach.  As I prayed for Ms. Litsey,  I felt an uneasiness inside.  Being a devout Christian, I do believe God answers prayers.  I also believe God is in full control of all things now and eternal, even though he allows men to have free will.  In God’s grace and discipleship, I  believe God allows seasons of free will so that he can lead those who are careless, to be broken and then brought into a desire to know him – (A Spiritual Awakening).  For the proud,  that circle often never happens.

Ms. Litsey was up against the most powerful men in our city.  Men like Randal Wallace, Mike Lowder, Mayor Rhodes, Wayne Gray and City Manager John Pedersen would decide the fate of her business and her future.  She was shaken and visibly at odds.

Soon afterwards in 2017,  on January 19th,  the Sun News reported that the leaked email below showed that Councilmen Wayne Gray, Randal Wallace, Mayor Rhodes, et al had intended to purchase the location of the business all along.  The city needed to force Ms. Litsey out of her lease so they could acquire it.

City Police Chief Warren Gall,  had claimed in November and December to local media that the area was being shut down because of the crime in the area.  In May, the Chief would retire, telling the MBPD team he was scapegoated by city council.  Sources inside MBPD state that Chief Gall said he retired because the City Manager and City Council asked him to do illegal acts he simply would not do.

As I prayed for Natalie on December 8, 2016,  I suddenly had premonitions about what the future coming year (2017) would look like.  Premonitions are not something the human mind can control nor comprehend,  but history is re-pleat with those.   I believe these happen to very ordinary people.  Several well known premonitions include:

*Joseph, son of Jacob, seeing himself as a future ruler of Egypt at 12 years old.

*George Washington having a premonition that America would win the Revolutionary War during the winter at Valley Forge.

*Abraham Lincoln having a premonition of his own death, days before it happened.

Because of my faith,  I hold firm that these inspired premonitions come from God himself and most often happen to everyday people, all the time,  like myself.

However,  the scientific community has sounded off on this issue as well.  According to Professor  Dick Bierman , a psychologist at the University of Amsterdam the event of seeing into the future is natural and real.

‘We’re satisfied that people can sense the future before it happens,’ says Dick Bierman , a psychologist at the University of Amsterdam. ‘We’d now like to move on and see what kind of person is particularly good at it.’ And Bierman is not alone: his findings mirror the data gathered by other scientists and paranormal researchers both here and abroad.

Professor Brian Josephson, a Nobel Prize-winning physicist from Cambridge University, says: ‘So far, the evidence seems compelling. What seems to be happening is that information is coming from the future.”

‘In fact, it’s not clear in physics why you can’t see the future. In physics, you certainly cannot completely rule out this effect, ‘ Josephson added.  “Virtually all the great scientific formula which explain how the world works allow information to flow backwards and forwards through time – they can work either way, regardless.”

SHORTLY after 9/11, strange stories began circulating about the lucky few who had escaped the outrage. It transpired that many of the survivors had changed their plans at the last minute after vague feelings of unease.

It was a subtle, gnawing feeling that ‘something’ was not right. Nobody vocalized it but shortly before the attacks, people started altering their plans out of an unspoken instinct.

Myrtle Beach City Councilman Randal Wallace posted on his facebook page this week,  however, that people who believed such things, (particularly me) are foolish kooks. [The entire post can be seen here] 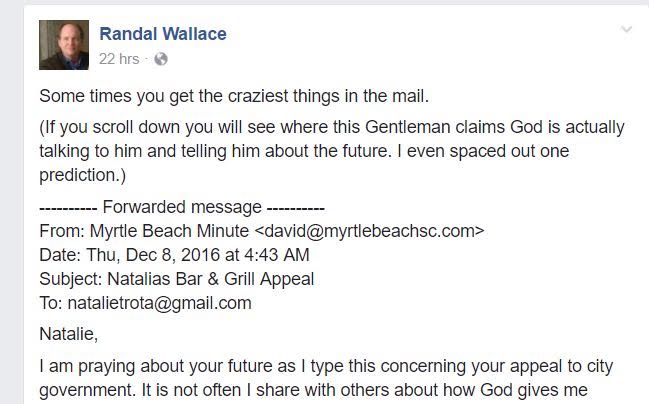 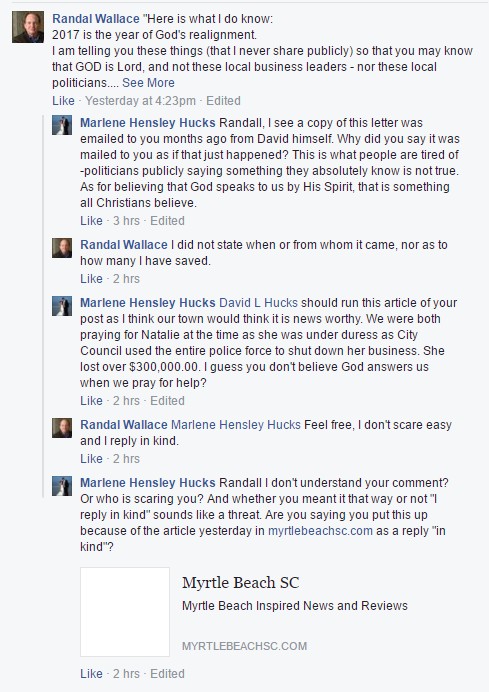 As I prayed for Natalie,  I had great compassion for the overwhelming situation she found herself in.  I had a premonition that God was going to take care of her and that he would restore every single item that these city councilmen were wrongfully taking from her.

I also, however, got a premonition that God was going to make great changes in city government in 2017.  NOTE- I was praying on December 8th.   I felt current city secrets would soon be revealed.  I saw a coming shakeup in city government.

I had no way of knowing about (the above) Councilman Wayne Gray’s email, which would later be leaked into the media.  An affair of that same  lead city councilman would also later be revealed  Spring 2017.

On March 8, 2017, residents and merchants rose up hand in hand in protest forming a human chain circling the very block where Natalie’s business once operated.

Mr. Wallace highlighted one premonition I had during that time of prayer.  I saw Mayor Rhodes being taken by a sudden death.  Wallace’s post seemed to suggest I wished the Mayor dead.   Nothing could be further from the truth.  I simply reported what flashed before me in images as I prayed.

Mr. Wallace, like so many intellectuals today,  believes that only “special people” claim to hear from God.  I can understand why these attacks happen as so many in our culture have substituted religion for a genuine relationship with God. We have all witnessed those “special people” as they worked the television sets calling themselves anointed and asking the public for money.   I put no more stock in those televangelists than I do leaders, like Wallace, who mock and belittle Christians.

However,  we spent millions of dollars to offer an alternative news voice for  Myrtle Beach locals and tourists, because we hold fast to the doctrine that everyday Americans who put their complete faith in God are not crazy.

Many of my Christian friends believe today that their faith is under attack by the media and those in government.  Many Christians feel a frightening need to defend their faith.

I feel no such compulsion.  I believe God needs no defending.  With God as our Lord protector,  it is we Christians who should be on the offense putting every ounce of faith we have into what we say we believe.

Below were my closing words in my email to Ms. Litsey during her time of great testing.

“History,  Natalie,  is HIS STORY.  We all are just playing our moment in time in God’s Story.   Count it as joy that he has picked you for such a key role in such a key time,” David Hucks.

I feel very confident in taking my own advice today.

To All Who Also Believe God Rules, Leads, Guides, Directs, and yes – speaks to our hearts, Have a blessed Sunday.