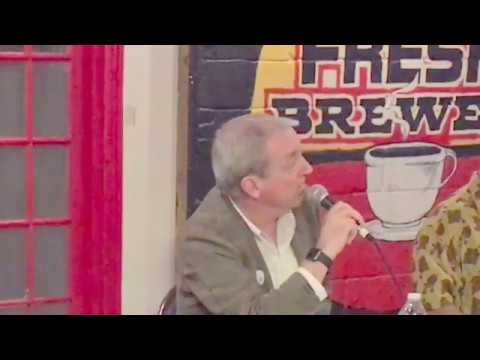 This past Friday night,  Mayoral candidate, Ed Carey addressed a group of voters at the Fresh Brewed Coffee House in Myrtle Beach, S.C.

Carey is an engineer who helped create Myrtle Beach’s Market Common.  While he spoke alongside three local council candidates at the forum, Carey is a well known team builder. Carey told MyrtleBeachSC.com he can and will work with any and all city council members the residents choose to put in office this November.  At the forum, Carey stressed the need for increased government accountability and transparency.

On his website,  Carey4mb.com, Carey states that he feels Myrtle Beach needs these long term improvements:

– Election to office is not a “job,” it’s an opportunity to serve (and go home)

are running for unprecedented 5th terms – 16 years going on 20

– Holding City elections in “off years” dramatically and intentionally reduces

●  Every individual and every neighborhood deserves representation

– Current meetings held weekday afternoons when many voters are working

– Current minutes have not been posted in months

End Of An Era