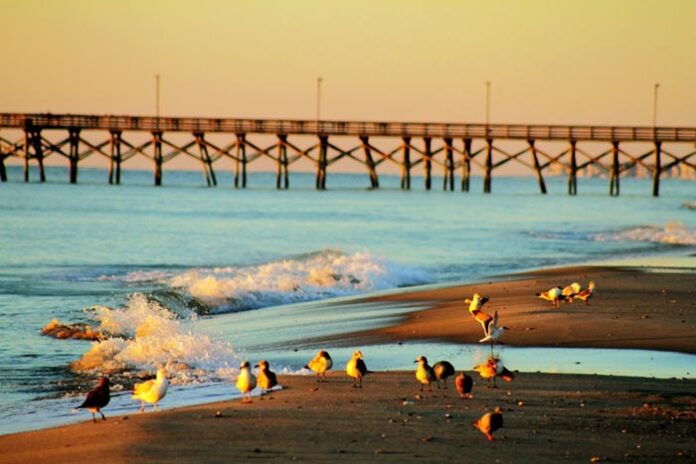 Myrtle Beach city elected officials have yet to comment on the South Carolina’s DHEC government website placing beaches inside the city limits of Myrtle Beach on the state’s LONG TERM ADVISORY.

MyrtleBeachSC.com reached out to Mayor John Rhodes, City Manager John Pedersen, and all of City Council all of last week in an effort to get a comment regarding the DHEC listing.   None returned our many email requests.

The only comments made regarding bacteria levels came when City Spokesperson Mark Kruea appeared on local WPDE TV ABC 15 about a recent incident regarding a break in a sewer pipe.  TV 15 is a favorite of the City and the Myrtle Beach Area Chamber of Commerce as it receives millions of dollars in tax subsidized funding from the city through the Myrtle Beach Area Chamber of Commerce.  On the same day as our bacteria NO SWIM ADVISORY story became viral on social media, TV 15 released a news story about the broken pipe. In listening to Kruea’s comments concerning the previous ABC story, many connected the state of S.C. high level bacteria ratings to the news about a broken pipe.  This connection turned out to be untrue.  The current DHEC ratings are because of long term high bacteria readings along the beaches inside the city limits of Myrtle Beach.

Other than these comments,  no public statements have been made by our local elected city officials.

What residents and local merchants have found peculiar is that while this story has now reached over 2 million concerned tourists, local officials have not yet called for the state of S.C. to conduct a new round of bacteria testing for the beaches located inside the Myrtle Beach city limits.  Such new tests would prove vital in calming local fears concerning the state’s current advisory.

As of Saturday,  with no word from any local city politicians, MyrtleBeachSC.com began referring national readers with concerns to the S.C. DHEC Help Line.  “It was our last, best option,”  said David Hucks of MyrtleBeachSC.com.  “This is a public health safety issue.  Our locals and our tourists deserve some answers.”

Private reports have come in to our news organization that a considerable amount of political pressure was put on Governor Haley’s office to change the current advisory rating.   As of this date, State officials have held firm with the high bacteria ratings which have been in place for the city of Myrtle Beach since last October.  Tourism in our area is a $3 billion annual revenue generator,  so readers can imagine the pressure that is at bear for DHEC to change the advisory immediately.   The state of S.C. is required to post honest and accurate numbers by Federal law, however.

Over 2 million people have now shared, viewed or discussed the DHEC advisory online over the past week.  This number is significant as only 15 million people visit Myrtle Beach annually.  With 13% of the tourist population now aware of the advisory,  local merchants believe it is time for someone in local government to address the issue publicly.

“We certainly trust Governor Haley and the State of S.C. to do the right thing,”  Hucks added.  “She continues to be one of  the best leaders our state has ever had. Whatever decision the state of S.C. makes,  we will report to our tourists.”

We expect many residents and tourists alike to call into local city offices and the DHEC helpline throughout this week.

Google.com, TripAdvisor, and other key social media have now verified, archived,  and posted the story this weekend.  It is now being distributed across most all social media channels.

*EDITORS NOTE:  A NO SWIM ADVISORY DOES NOT BAN ANYONE FROM GOING INTO THE OCEAN. THE BEACHES IN THE CITY OF MYRTLE BEACH ARE NOT CLOSED.  THE DHEC ADVISORY IS SIMPLY POSTED TO ALERT BEACH GOERS OF HIGHER LEVELS OF BACTERIA IN THE OCEAN WATER.  The most common recreational water illnesses from swimming in ocean areas with high bacteria readings are gastrointestinal and may cause vomiting, diarrhea, nausea, abdominal pain or fever. These illnesses result from swallowing water contaminated by disease-causing organisms. Contact with contaminated water can also cause upper respiratory (ear, nose and throat), and wound infections. Young children, the elderly, and those with a weakened immune system are particularly vulnerable to recreational water illnesses.