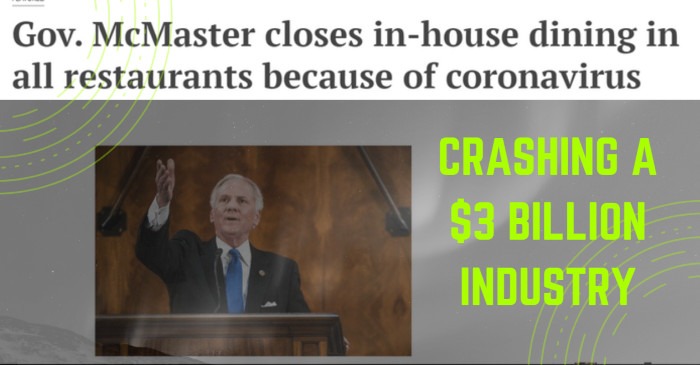 “We are asking people to stick together and understand we’re in a crisis,” Governor Henry McMaster said in a late-afternoon press briefing Tuesday afternoon.

“Social distancing is the absolute right strategy according to public health officials,” Greenville, S.C. Mayor Knox White said. “Local leaders have the power to influence citizens, and we must limit person-to-person interaction. We must take action that’s proven to be effective in prevention.”

The tourism industry along the Grand Strand is a $3 billion annual industry.

Most waitresses, cooks, servers and working staff in the Myrtle Beach area live paycheck to paycheck.

IS THIS A GOOD TRADE OFF?

The same government mandating private business closures, promises government assistance to those affected. The move by the S.C. government is an effort to flatten the future curve of those infected in the state.

A report published yesterday by STATNEWS.com states: In a rare piece of good news about Covid-19, a team of infectious disease experts calculates that the fatality rate in people who have symptoms of the disease caused by the new coronavirus is about 1.4%. Although that estimate applies specifically to Wuhan, the Chinese city where the outbreak began, and is based on data from there, it offers a guide to the rest of the world, where many countries might see even lower death rates.

As of yesterday, there were 47 cases of those infected in S.C. One elderly person has died.

American history, since the 1940’s, indicates that once government crosses a certain legal threshold of asserting its governmental rights, it rarely cedes that territory, even after a crisis is tempered or averted.

Will S.C. residents be able to re-calibrate the line of where the government believes it should operate once this virus subsides? Or is this a new normal of government’s dictates on private enterprise?

At the very moment when Governor McMaster is closing all Myrtle Beach area restaurants to indoor dining, the Myrtle Beach Area Chamber of Commerce is being tax subsidized $50 million annually to promote tourism to the area.

The government, itself, is dependent on tax dollars, produced by industry to fund operations.

WHO IS DEPENDENT ON WHOM?

Healthy males and females between 20 and 40 have largely been unaffected by this crisis world-wide. Should we close all restaurants and bars to those unaffected?

The elderly have been affected and children are suspected to be carriers.

Will a one size fits all government mandated solution crash a $3 billion industry? If so, will a government assistance program then be a silver lining?

How does government fund itself when it cuts off its own sources of tax revenue?

EDITOR’S NOTE: The natural and normal daily death rate in America is .086%. The fatality rate in people from Wuhan China, who have symptoms of the disease, is about 1.4%