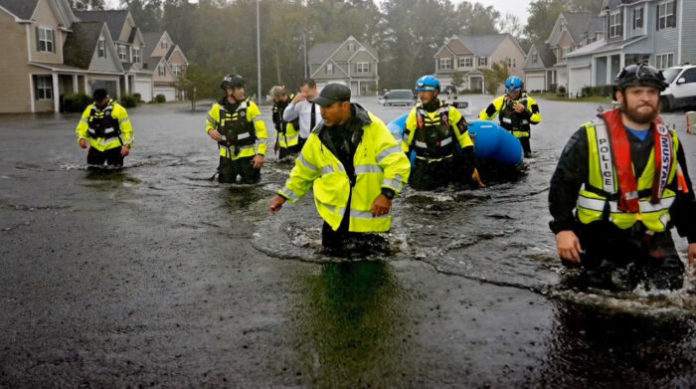 Since Hurricane Florence, families who flood have come together in a Facebook Group called Horry County Rising and have been working to reduce flood vulnerability. One of the leading efforts to minimize these impacts is Horry’s comprehensive plan, Imagine 2040. The group’s recent efforts have been focused on getting Horry County Council to adopt their future land use comprehensive plan by sharing components of the plan that minimize flood impacts.  Their call to action, encourage the council to approve Imagine 2040 at the next council meeting this Tuesday.

Flooding is one of the most dangerous and threatening hazards in Horry. In just the past 4 years alone, South Carolina has spent close to 3.5 billion in catastrophic damages leading to 37 deaths. These heavy rainfall events are slow, wet and frequent, in the past 20+ years we have experienced 30+ such flood episodes. Imagine 2040 was designed with public safety as it’s number one goal because South Carolina is ranked number seven in flood vulnerability and a significant portion of our residents are living in hazard areas susceptible to repetitive flooding. In fact, 31% of the repetitive flooded families in South Carolina are in Horry. Due to these hazards, Imagine 2040’s Safe Communities Goal was established, it includes developing a Floodplain Management Plan and Repetitive Loss Area Analysis to decrease impacts and increase our sustainability so we prevent, recover and rebound more quickly.

Imagine 2040 highlights the major components to flood resilience, discouraging development within the floodplain and along river corridors. Approximately 25% of Horry County lies within the 100-year floodplain and is vulnerable to flooding. Flood prone areas were the primary factor in the environmental constraints analysis that defined scenic and conservation parcels in Imagine 2040. Imagine 2040 includes strategies to minimize flooding impacts with an Environmental Sustainability Goal, “conserve the function of floodplains.” By defining these areas and adopting them as “scenic and conservation” coupled with land use changes, we can increase our resiliency and protect 50% of the county from flooding for generations.

Imagine 2040 clearly defines these wetlands and the need to enact stronger wetland regulations that exceed state and federal standards. South Carolina is losing 2,920 acres of wetlands per year (Dahl, 1999). Comparison of 2001 vs. 2016 National Land Cover Data (NLCD) for South Carolina shows that we continue to lose wetlands at a slightly reduced rate of 2,574 acres per year, primarily to urban development (Multi-Resolution Land, 2016). Roughly 50% of unincorporated Horry lands contain wetlands, marshes, waterways or is soggy, making flood resilience a top priority for residents and Horry County Rising. Wetlands make up approximately 38% of Horry County, with the majority being freshwater (NOAA Horry County Snapshots, 2018). This represents a net decrease of roughly 5.3% since 1996 despite growing efforts to preserve wetlands they continue to be lost at a rapid rate from direct conversion and degradation. Wetlands are a networked system, they help reduce flooding and filter rainwater, supplying tremendous benefits to the coastal community.

Imagine 2040 also provides incentives for developers to preserve natural vegetation and trees. South Carolina is approximately 67% forested as of 2017 (Lambert et al., 2019). The state’s forest cover was stable from 1968-2006 (South Carolina’s Forest, 2019), though recent inventories document losses of 16,320 acres in 2016 (Brandeis et al., 2017) and 56,800 acres in (Lambert et al., 2017). Per SC Forestry, Horry County contains 725,574 acres of land of which 460,176 acres is classified as forestland, with 30.7% considered forested wetlands and 18.7% as upland forests. Nearly all of the upland forests are comprised of evergreens, while bald cypress and water tupelo trees are located along the floodplains of our waterways and within Carolina Bays. Forest land is a critical form of natural infrastructure, as it regulates infiltration and runoff to prevent flood impacts. Imagine 2040 has measures in place to protect mature trees, including a Tree Preservation and Landscape Buffer Ordinance. This ordinance has mitigation requirements when large trees are cut down for commercial development. In addition every commercial project is also required to put trees back into the landscape. In recent years, there have been overlays added to the zoning ordinance which require additional trees greater than the requirements of the Landscape Ordinance to be added to commercial designs. Forestlands are valuable natural resources, participants in the Imagine 2040 Land Use Mapping Workshop indicated a number of areas where tree and forestland preservation are desired. While some of these areas were in rural areas, many were in the urban and suburban communities of Carolina Forest, Burgess, Forestbrook, Socastee, and Little River. These policies not only help minimize future flood losses but also encourages the private sector to partner with the community through shared values, protect Horry families from catastrophic losses due to flooding.

Our waterways are dynamic and evolve over time. Making sure we allow for their physical changes is vital, by allowing for that progress in expansion and adapting to the changes in our landscape (not filling them in to build) we are protecting against future floods and reducing risk. By implementing Low Impact Development principles and practices, water can be managed in a way that reduces the impact of built areas and promotes the natural movement of water within an ecosystem or watershed. Through new development options Horry County can provide incentives for the private sector to partner with the community on these shared values but Imagine 2040 must be adopted in order to implement sustainable development options for future land use projects, including evaluating the feasibility of prohibiting fill within the flood zone.

Preserving habitat, protecting property, and ensuring equitable public access are just a few of the challenges addressed within the Horry County Beachfront Management Plan and Imagine 2040. Since 1954, your beach renourishment expenditures have totaled $452,946,020. As sand harvesting becomes scarcer, the price tag will continue to rise (Paul Gayes 2018). While renourishment maintains the recreational use of the beach and sustains the habitat that is necessary for wildlife, South Carolina has the highest maximum erosion rate. Beach renourishment also needs to be completed approximately every 5 years and too expensive to sustain. As the predominant strategy to reduce oceanfront flooding and mitigate beach erosion in South Carolina, we can come together to prevent future flooding through land use regulations and nature-based solutions that will cost less and sustain the community longer.

Applied on a large scale, low impact development practices can maintain or restore a watershed’s hydrologic and ecological functions (Urban Runoff, 2017). Poor water quality can result in fish kills, interfere with or prevent recreational uses of our counties’ water bodies, closure of shellfish beds, fish consumption advisories, reduced water supply, taste and odor problems in drinking water, potential human health problems due to contact with bacteria and chemicals in runoff, and increased potential for flooding from water bodies choked with sediment.  Impervious surfaces, such as roads and rooftops, adversely impact water quality, as they reduce the natural infiltration of rainwater runoff. Between 2014 and 2017 alone, Horry County’s impervious surface increased by more than 1,960 acres, which is equivalent to 1,485 football fields. This means that of Horry County’s 803,200 total acres, roughly 35,073.82 are impervious, translating to 4.37%.

To support adopting Imagine 2040, you can sign the call to action, email or call your councilman or attend the council meeting on Tuesday, December 10th at 6 p.m. at 1301 Second Avenue in Conway when they vote on Imagine 2040.