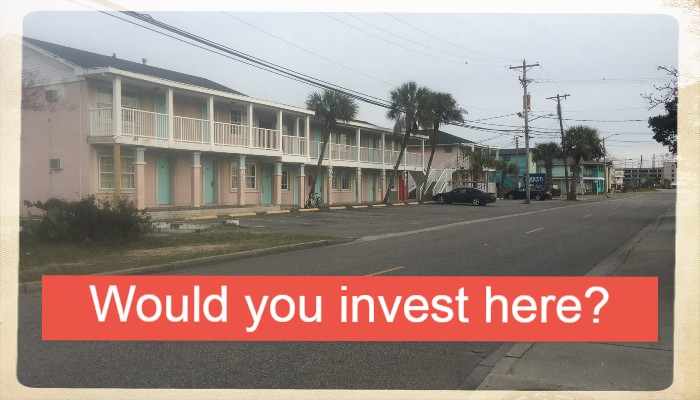 Five years after the city began to forcibly close all of the privately owned bars in the Superblock, Myrtle Beach city residents have yet to see any of the promises made by city government.

The Superblock library is now promised in a different location. The Superblock Children’s Museum faded into whispers. The promises of better yet to come continue.

Meanwhile, the downtown continues to be infested with an estimated 2,000 homeless people.

Tourists watch herds of heroin addicted and fentanyl addicted vagrants walk the streets, hawking for a few dollars at practically every open business.

Since 2015, City Manager John Pedersen continues to wave the magic wand of big government in an effort to solve the city’s lack of new investor problems. Outside investors, however, have been slow in taking him up on the millions the city has offered in investment tax credit incentives and historic tax credits. In fact, there have been few takers on property located just 4 blocks from the oceanfront.

The downtown continues to resemble what local media personality, Chad Caton, calls “A bombed out Beirut”.

On Tuesday, City Council increased its big government efforts by approving the first reading of an ordinance that creates floating and lesson-ed zoning restrictions. The ordinance also expands the boundaries of the Redevelopment District Zone to encourage mixed-use development and redevelopment from 29th Avenue North to approaching Market Common (17th South) between Kings Highway and Ocean Boulevard.

These are the sections where Myrtle Beach locals say you can see “walking zombies” roaming the streets on a daily basis.

As the Sun News reported: Business leader Bill Pritchard said he expressed in a phone conversation with City Manager John Pedersen, Prichard’s recommendation to keep areas of focus within the city “surgical.”

“And then I get this. This just blows me away,” Pritchard said during Tuesday’s meeting. “I almost don’t know how to react to it. Maybe it’s what city council wants to do, but it doesn’t seem like a direction I can be comfortable with.”

Planning Commissioners cited the large area of land put into consideration as a major concern, along with the “administrative nightmare” it will cause with thousands of properties in question that could all be considered RDZ and how lifting the zoning restrictions could negatively affect the city.

“This is an effort to jump-start something, and what concerns me about this is, is it going to draw in quality development? I’m not sure changing what we’ve currently got will make a difference,” said Ann “Brittain” LeMay.. “I think it’s reckless.”

Lemay runs Brittain Resort Hotels. Her family owns the most powerful property management firm in the city. To witness these founding leaders rebuking city council and the city manager in the public media is highly uncommon. It speaks volumes about the current confidence in City Manager John Pedersen’s leadership.

“We haven’t had blazing success from that area,” Pritchard said. “This isn’t doing what we want done, and it doesn’t seem to be working.”

“There’s not enough communication from council on plans,” LeMay added.

Both Pritchard and Lemay serve on the city’s planning commission. The Planning Commission will hold a public hearing on the proposal on Feb. 4 at 1:30 p.m. at the City Services Building on Oak Street.

Many merchants believe the city was active in accelerating the decay of the downtown. Businesses were not allowed to open in empty store fronts. Small repairs were limited by the city, unless large sums of monies were put up by merchants for an entire overhaul of their properties.

Zoning and community appearance board restrictions tied the hands of current and new potential small investors. The results can be seen as below.

These are just a few snapshot examples of pictures than can be taken over 129 times or more. Blight abounds city-wide.

Our readers will note: City Manager John Pedersen continues to make accusations that our reporting is the real problem with downtown Myrtle Beach. He went as far as sending us an email claiming that we have a “vendetta” against him personally.

In over 16 years, no other city mayor, city leader nor city staff have made such claims about our reporting, other than those in the City of Myrtle Beach. This includes all other municipalities in Horry County.

Could it be that we are simply reporting what is?

The establishment business class is just now beginning to openly discuss their own concerns about the city manager’s level of competence in running the city’s affairs.