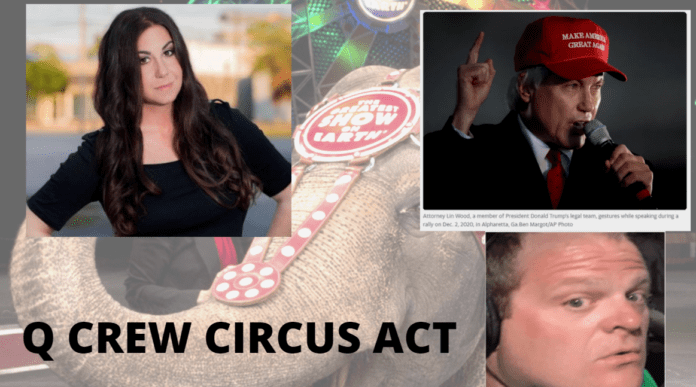 Lin Wood worked to gain the trust of Wisconsin self defense victim Kyle Rittenhouse, offering his initial services. Wood raised $2 million dollars in legal defense funds from the general public, yet refused to forward those funds to the Rittenhouse family.

Those funds could have paid bond for Rittenhouse’s release from jail. Wood wrote that Rittenhouse was safer in prison and claimed he was keeping the funds to cover his “overhead”.

Rittenhouse was found innocent of all charges by a Wisconsin jury of his peers last week.

In an interview with CNN’s Chris Cuomo, Richards said he and Wood “went head-to-head” and Wood would probably sue him. He said Wood was an “idiot” for letting Rittenhouse talk to The Washington Post while he was charged with homicide.

Richards said he was concerned that Wood and attorney John Pierce were “basically trying to I think whore this kid for money, for their own causes.“

“They kept him in Illinois to fight an extradition that was unwinnable cause they were raising tons of money on him,” Richards said.

Richards served as Rittenhouse’s attorney when he was found not guilty on all five charges brought against him on Friday.

This group of QAnon opportunists are largely led in the State of S.C. by Tracy Bean Diaz. Diaz is the brain trust of the rag tag outfit, if the group actually has such a brain.

The group is loud and works frenetically through surrogates like mouthpiece Chad Caton in an attempt to find relevance for whatever issues pop up at any given time.

This week it was vaccine mandates.

THE REDDEST OF THE RED

The Q Crew never takes on Democrats and gives nothing more than lip service to “Republican In Name Only” establishment candidates.

The strategy of this group is to weaken and attack the most conservative members of the S.C. general assembly.

MyrtleBeachSC News notes that these are two of the most conservative members of the S.C. House of Representatives.

IS THIS BY IGNORANCE?

The Q Crew claims to be red meat conservatives themselves. Are they choosing to attack the most conservative members of the state by ignorance?

Says Corey Allen of the Overton Report: “I don’t think so. I think they WANT it to fail, so they can grab more power in the chaos. It isn’t out of them being stupid, or inept…it’s purposeful, calculated sabotage.”

Mainstream news is quick to write that a great divide exists in the S.C. Republican party. However, Wood was only able to garner 22% of the vote in his run against McKissick. Such is hardly a divide.

This QAnon group is one loud circus act, headed by QAnon Queen Tracy Been Diaz.

At the moment, few are paying attention as was exampled by their press conference of last night in Greenville, S.C.

The group never garnered more than 50 people watching their livestream at any time during an over the top press event.

We shall see if Mr. Wood is able to successfully win his suit against the legitimate and successful Rittenhouse lawyer, Mark Richards.