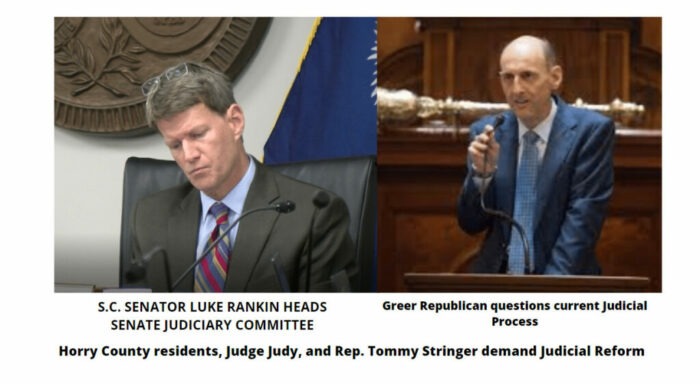 The committee declined to take any action against the state’s circuit judges over two decades despite more than 1,000 formal complaints.

Besides Murrell Smith (R- Sumter County) , the other lawmakers on the screening panel include Reps. Todd Rutherford, D-Richland, and Chris Murphy, R-Dorchester; and Sens. Rankin, who is the commission’s vice-chairman; Ronnie Sabb, D-Williamsburg; and Tom Young, R-Aiken.

All six legislative JMSC members are lawyers, as are three of the four other panel members.

In a House Legislative Oversight Committee meeting Monday, Stringer asked for a review of both bodies. He noted they were formed in the 1990s in the wake of a major Statehouse corruption scandal dubbed “Lost Trust” by the FBI, which took down more than two dozen lawmakers, lobbyists and others.

“The (Judicial Merit Selection Commission) was established 25 years ago in response to Lost Trust to try to bring some level of trust back to state government,” Stringer told his fellow lawmakers. “And I think that the JMSC has operated well since then, until just recently.”

In making his request, Stringer cited “The Untouchables,” the joint investigation published in April by The Post and Courier and ProPublica.

Circuit judges have faced more than 1,000 formal complaints over the last two decades, but the Commission on Judicial Conduct has declined to publicly discipline a single one of them, the investigation found.

“In the last 20 years, the commission has not punished one single judge for ethical misconduct,” Stringer said. “All of our judges over the past 20 years cannot have been that perfect.”

NOT SO PERFECT SAYS JUDGE JUDY

Judge Judy is a well known T.V. Celebrity. She is also a working Judge. Judy says Family Court Judges are morons and political hacks. She believes the media should be allowed to sit in and record Family Court.

As former decorated veteran Kash Jackson explains, in the family court system, the judge is simultaneously Judge, Jury and Executioner. These judges are allowed to put parents, who come before the judge in Horry County Family Court, in prison. This, in effect, turns family court into criminal court.

Grayson “Kash” Jackson is a United States Navy veteran and libertarian political activist. Jackson grew up in Bossier City, Louisiana. He served in the U.S. Navy for twenty years, retiring as a petty officer first class in August 2016

Others state they hope Rankin will join the group, demanding Judicial Reform state-wide, himself.

Surfside Beach shows as popular new Mayor is sworn in