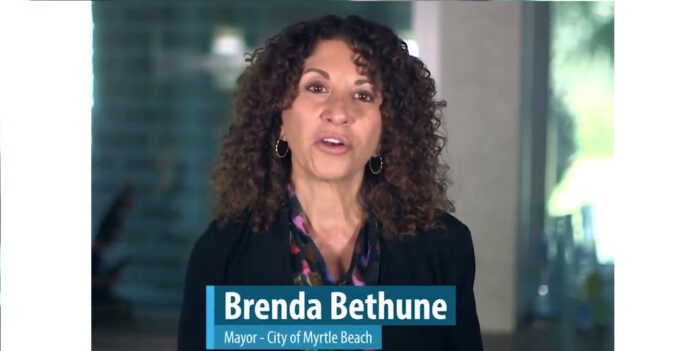 The continued funding was to be allocated to building I-73.

While our news organization cried foul, Mayor John Rhodes (mayor of Myrtle Beach at that time) and the city of Myrtle Beach appeared pleased with the extension. Mayor Rhodes, Lazarus, MBACC C.E.O. Brad Dean, Rep. Alan Clemmons, and U.S. Congressman Tom Rice believed the extension was a win for I-73.

Not one elected city of Myrtle Beach leader raised a concern.

Fast forward two years later. Myrtle Beach Mayor Brenda Bethune now says the tax is illegal. In fact, it always was. However, the tax brought in $41 million to the county.

“The County’s proposal [is] essentially double tax city residents by collecting a service fee within our jurisdiction to pay for services that city property owners already support through their taxes,” wrote Myrtle Becah Mayor Brenda Bethune to Horry County Chairman Johnny Gardner . “Even if the fee were legal, we see no benefit to our constituents from that arrangement.”

The I-73 discussions are merely Horry County government and the City of Myrtle Beach negotiating on who gets the money and how much money.

The interstate has taken a back seat to financial concerns.