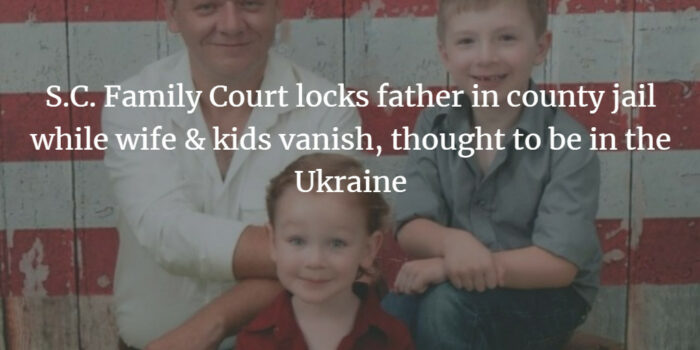 Tonight one eighth of all people sitting in county jails across the state of S.C. are locked up without being charged criminally.

Rather, they are in jail facing the civil charge of unpaid child support.

Clint Doran, of Kershaw, S.C. met his future wife on a chat line. Liliya lived in the Ukraine. The two spent hours on that chat line getting to know one another for several years. Ultimately, Doran flew to Germany to meet Liliya. During their time together in Germany, Clint proposed. The two were married in Camden, S.C. Liliya moved permanently to South Carolina and applied for U.S. citizenship. They currently have two young sons.

It was only after settling into the U.S. and giving birth to their children that Liliya decided the marriage was not working. Half of all marriages in S.C. end in divorce.

WHY IS SHARED CUSTODY UNUSUAL?

After an ongoing multi-year saga, of bitter back and forth between the couple in the S.C. Family Court system, Clint found himself unemployed, broke, and living with his mom.

As his prospects diminished and his troubles increased, Clint was intermittently unable to meet his monthly child support payments. Getting behind on payments always led to another court date, which then increased his court fees and attorney fees payable to his wife’s S.C. Attorney Kathryn Free of Elgin, S.C.

Doran was jailed in early July 2019. He has been in the Kershaw County Detention Center now for over one month. His charges are listed by the detention center as “Family Court.”

In going through the phone maze at the Kershaw county detention center, it became clear that speaking with a person was virtually impossible. When we navigated the phone maze for how to set bond, the system responded “NOT FOUND”.

We then reached out to Attorney Free. As the legal representative of Liliya we asked Free if she could tell us why Clint was incarcerated and what bond amount would get him released. She immediately became guarded and stated, “What’s your angle on this?” I told her our angle was to find out why Doran was incarcerated and how much his bond was.

She then stated, “If you knew who this person was, you would never run this story.” As I repeated my questions, she then asked if I was threatening her as she was an officer of the court. I, once again, informed her I simply did not have information on the nature of the arrest nor the amount of bail necessary to have Doran released. Free directed us to the Kershaw County Clerk of Court, Janet Hasty.

After speaking with Hasty, we reached another dead end.

From my years of reporting, I am aware that had Clint been criminally arrested, his bail and charges would be a matter of public record. As his arrest was civil, I was amazed at how difficult finding simple facts became.

You’ll notice that the clerk of courts, Janet Hasty, as well as Tommy Morgan, the attorney for the county are on this email thread. I have spoken with Ms. Hasty and was referred to Mr. Morgan’s office where I was dumped into a paralegal’s voicemail, continuing the “run around.”

I find it extremely odd that Kershaw County has a man in jail, but no one can tell me what I need to do to make bail for him, and satisfy any outstanding financial requirements that are mentioned in his order.

I have no interest in learning about his case. I have an interest in getting him released from Kershaw County custody as is pretty standard for individuals in jail. If he cannot be released until a court ordered sentence is satisfied, that’s fine, but someone can provide that information. It is extremely concerning, as a member of the public, that this is even possible. Don’t you guys provide bail information for violent criminals?

Our investigation lead us to believe that the system views Clint and others like him as an “it”. “Its” have no rights nor any assumptions of rights.

Despite his or her current circumstances, a “Thou”, however, is a created being and a child of a living God. Once upon a time in S.C., families decided how government operated. In 2019, the family court system manages half of all families in the state.

Doran missed a May 2019 court date earlier this year. On the date of court, he woke with numbness in both his hands and feet. He was transported by ambulance to the Kershaw County Hospital. Family Court proceeded without him. He was then served a contempt of court order. During his hearing in July, he was sent to the Kershaw County Detention Center. Kershaw County Asst. Attorney Morgan informed us that he was incarcerated for unpaid child support and legal fees owed to Mrs. Free.

Dr. Stephen Baskerville is a Research Fellow with the Independent Institute, Associate Professor of Government at Patrick Henry College. Dr. Baskerville is the author of the book, Taken Into Custody: The War Against Fathers, Marriage, and the Family (Cumberland House, 2007), and his writings on family and fatherhood issues have appeared in leading national and international publications, both popular and scholarly, including the Washington Post, Washington Times, Independent Review, American Conservative, Salisbury Review, Society, Human Events, Women’s Quarterly, and Catholic World Report.

Says Baskerville, “So it’s this idea of the dead beat dad. I have written several articles showing that the dead beat dad is a hoax. We are told the dead beat dad is a figure who abandons his children, refuses to pay for them, and esconds (transitions) into the stereotype of the [new] trophy wife and the red porsche. That is not the case. These are overwhelmingly men whose children have been confiscated through literally no fault of their own. Children taken away from them without any grounds and then they are forced to pay exorbitant sums of money which leaves them oftentimes nothing to live on.”

The Marriage Commitment and a different justice

The bulk of formerly married, now divorced fathers in county jails tonight are there due to unpaid child support.

Yet, as many as half of all children born in South Carolina are born to unwed parents. The way that the law treats unwed fathers’ rights is different than if the dad were married to the child’s other parent.

Do Unwed Parents Have Equal Rights?

When the parents are unwed, Section 63-17-20(B) applies, which gives full custody to the child’s mother. According to the law, the natural mother maintains sole custody of an illegitimate child unless she relinquishes her parental rights.

In S.C., these “not married” dads are rarely held to the same standards of child support as applied to divorced fathers. However, by default, these dads were never willing to make the marriage commitment of investing in their child’s life.

Our investigation found that the system is literally a kingdom unto itself. Judges, lawyers and a “Guardian Ad Litem” (appointed attorney for the children) combined have the legal power to make unchecked decisions. One parent often has his or her children removed without normal concerns for due process. Due process is a fundamental right written into the U.S. constitution.

No jury trial is available for those accused in family court. The customary court process of confronting your accuser is also uncommon. Those incarcerated are not convicted of any crimes. A family court incarceration is warranted as a result of a civil penalty. No crime has been committed.

Family court incarcerations are today’s version of what has been historically known as “debtor’s prison.”

After we asked questions throughout Kershaw County, friends of Clint Doran began asking questions as well. We are told Mr. Doran may be released this Monday, August 26th.

While he has been in custody these past 30 days, Doran’s wife and his two sons have since vanished. Liliya is a dual citizen of both the U.S. and the Ukraine. Mr. Doran suspects his wife has fled the country taking his sons to the Ukraine with her.

Doran’s friends set up a GO FUND ME page this week to help him financially. Visit that Go Fund Me page here: https://www.gofundme.com/f/clint-doran039s-release-from-jail?rcid=r01-156640742115-32ef1e07d25e40d6&pc=ot_co_campmgmt_w&fbclid=IwAR1zGBlSCBDa-lq1ogJ1GBxKwEh3tj_ip0nuONprkAGE66q5qMch-WZDKCo