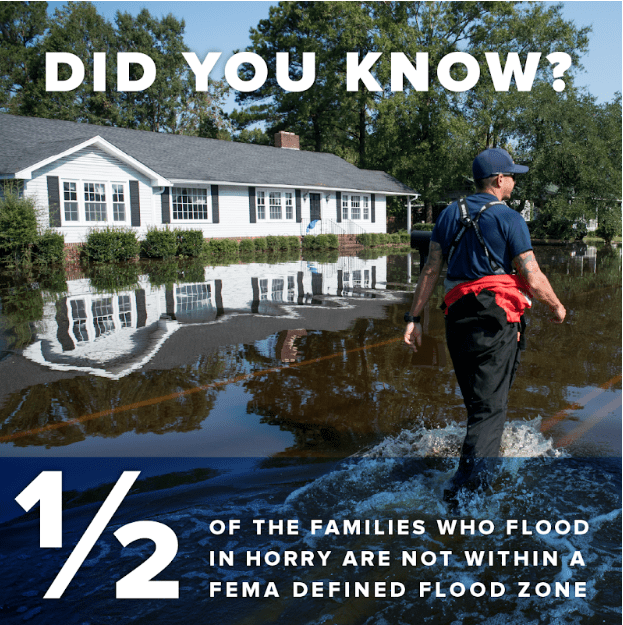 April O'Learyhttps://horrycountyrising.com/
April O'Leary is the founder of Horry County Rising. April , her husband, and two children were displaced by a flood when Hurricane Florence hit. April is now an advocate for responsible building. Horry County Rising's "Don't Build In The Swamp" campaign has created tremendous awareness in our area about the importance of responsible development.

The financial consequences of flooding have been devastating to Horry County’s families according to a new study by Climate Cost Project. On average, those that are affected spend $20,000 in out-of-pocket expenses. Further, as result of the high costs of repairs, more than half report not replacing or repairing home damages. Remarkably, the study found that people with insurance or who received assistance from the Federal Emergency Management Agency (FEMA) tended to pay more on average than those without coverage because people without coverage tended to live in areas that were less affected by flooding. Over half of those affected by flooding in Horry County live outside coverage areas and are not required to carry flood insurance with a federally backed mortgage.

Fixed income families and retirees who flood are literally and fiscally underwater.  Sixty percent of families took on credit card debt to cover their out-of-pocket expenses after flooding. People who were able to pay without debt reported depleting their retirement accounts and children’s college accounts, which forces many homeowners out of retirement or having to take out thousands in loans. But perhaps worst of all, this reallocation of money went into houses that, in almost all cases, were losing value because they flooded multiple times. The result is flooded families who spent their money—and money they didn’t have—to restore a flooded home declining in value.

The consequences of these enormous costs to Horry’s families are devastating for the affected people, most of which are members of Horry County Rising, Inc. (HCR) a political activist group who has been pushing elected officials for better flood protections. This year, members of HCR have been imploring the Horry County Council to stop building in the swamp, and guarantee new regulations that would protect homes from water damages where developers build on lands that flood. With good reason, Horry’s flood risk is increasing, since 2015 five hundred newly constructed homes have been built in the county’s special flood hazard zone. The new homes have a 1 and 4 chance of flooding over the course of a 30 year mortgage and inside the AE Zone (High Risk Flood Zone) developed land has increased by 24%.

The policy changes include regulating a Supplemental Flood Zone (SFZ), which captures lands that were flooded in 2018 due to Hurricane Florence. Council will also consider the elevation standard for areas in a regulated floodplain to require a 3 feet elevation above the expected flood level. Another safeguard rule will provide compensatory storage where fill is used to meet the new elevation requirements. Rather than restricting the use of fill, the policy requires future development to provide storage capacity for floodwater in both the 100-year floodplain and the SFZ which makes certain existing homes along river corridors are not impacted by storage reduction as a result of that fill.

The founder of Horry County Rising, April O’Leary explained to us why she believes these measures are needed, “In the last twenty years, taxpayers have spent nearly $900 billion in flood damages and we believe the new regulations reflect fiscally conservative ideals.  For example, taxpayers have paid $1.5 million to rebuild a flooded home in Socastee that’s worth $150,000. What’s worse is the scale of the problem, from 2000-2020 the annual number of FEMA claims in Horry County increased by 1670%.  Collectively, we can do more to mitigate impacts to existing families who are affected and protect future families from flooding who invest in Horry County. The council has an opportunity to vote on a practical approach to reflect these shared values.”

What’s next for this group of political activists?  O’Leary says she hopes to work with the county staff to start tackling four years of backlogged work orders, push for mitigation projects that will improve conditions for families vulnerable to flooding and make sure there’s a Horry County flood plan.  “We also need better data, we have been pushing elected officials and congressional representatives to fund additional stream gages, watershed studies and update NOAA’s Atlas 14 to ensure recent rainfall trends are captured.” O’Leary states that half the battle is knowing where, when and why it floods. “These tools would improve forecasting, modeling and provide the data we need to develop a localized flood warning system to better prepare our community for catastrophic flood events such as Matthew, Florence and even flood events we experienced this year in February and March because of high peak rainfall.”

Almost all families who are affected by flooding report that they do not feel safe in their home, and they are afraid it would flood again. For those HCR members who have been affected, their grief and fear led to meaningful solutions, common sense measures touted by leading hazard mitigation specialists, state floodplains managers, emergency managers and FEMA. The new regulations would be the first major update to Horry’s flood laws since 1987, and increase flood protections for Horry’s citizens which will improve the county’s public safety.

For the families who have experienced tragic flood events in recent years, their anguish will prevent their future neighbors from a similar flood fate. The County Council will vote on the new regulations June 15th. Horry County citizens can sign up for public input to speak to the council about the policy changes by calling the county’s clerk at (843) 915- 5120. HCR members will meet at the flagpole on 1201 Second Avenue in Conway at 5:30 pm on June 15th. O’Leary and members of Horry County Rising plan to give away t-shirts, yard signs, engage with flood voters and ask council to support the new measures ahead of their vote. To learn more about Horry County Rising, you can visit their website HorryCountyRising.com