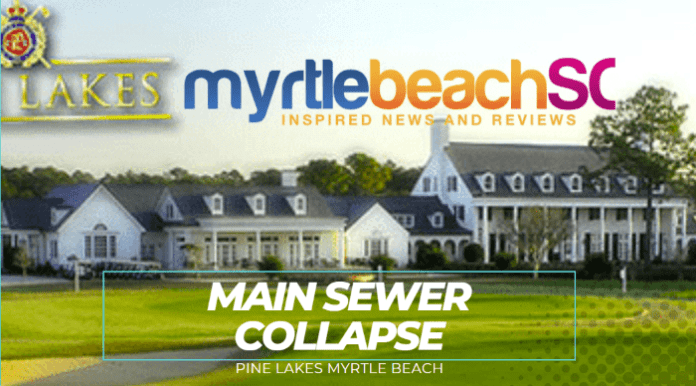 Routine Health Checks to Keep Your Little Ones in Good Shape

Officials in city government tipped off MyrtleBeachSC News of a collapsed sewer line in the Pine Lakes neighborhood located at Woodside and Pinckney.

The source said that the city knew of the problem for the last 3 to 4 years.

The city source added: All that raw sewage from all those houses up the line was just seeping directly in the ground. The area has been like a giant septic tank for more than 3 years.

The source asked: How does our city management and SCDHEC find that acceptable?

WHERE DOES THAT GROUND SEWAGE GO?

As MyrtleBeachSC News has reported for more than 10 years, that ground sewage finds its way to the Oceanfront through drainage pipes that extend along the beachfront.

These sewage leaks cause high bacteria spikes making the water unsafe to swim or fish in within 400 feet of these drainage areas.

The Myrtle Beach city coastline is constantly threatened by the ocean’s waves, and the city’s sewage system is constantly under threat of leaking. This means that when a storm comes through, there are high chances that it will increase bacterial levels in the water.

In addition to this, if a hurricane hits Myrtle Beach, there are high chances that it will cause sewage leaks which will increase bacterial levels in both water and air.

The Myrtle Beach ocean is a cesspool of bacteria and sewage.

The Myrtle Beach City Ocean is one of the dirtiest in the United States. The Myrtle Beach ocean has been reported to have high levels of bacteria and sewage. This is due to leaking sewage lines that were not repaired for over 8 decades.

The situation has gotten so bad that there are now warning signs posted along drainage areas on the beach stating that it is unsafe for swimming or fishing within 400 feet of those areas.

Columbia, SC’s School of Medicine ranked as the best online university in the US