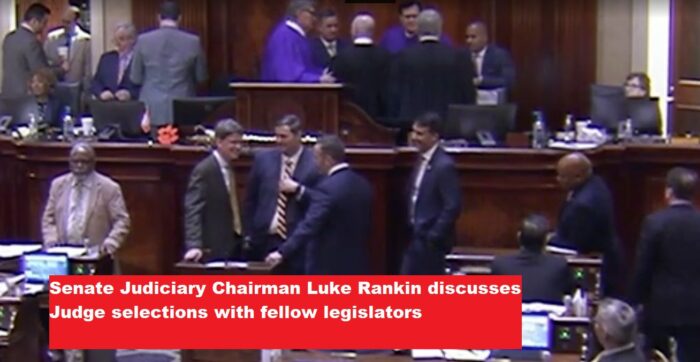 On Wednesday, a group of “Constitutional-Minded” legislators walked out of session during the General Assembly’s picking of S.C. Judges. This new group of elected officials are demanding S.C. Senators and Legislators follow the S.C. State Constitution. They are also demanding judicial reform.

S.C. Rep. Adam Morgan was one of the Statehouse’s newest members last legislative session when a fellow lawmaker approached his desk on the House floor with a question: Had Morgan committed his vote to any of the candidates in one of the contested races to be a state judge?

A lawyer, Morgan knew that South Carolina was one of two states where the legislature selects judges. But when last year’s nominations of candidates for several dozen judicial seats were released, he expected the races to be decided weeks later in a scheduled vote by the General Assembly.

That’s not how it works, Morgan learned, as he watched members walk the House floor collecting tallies of supporters for judges who faced contested races. That information, when relayed to candidates, was taken as a signal for which prospective jurists were expected to win and those expected to drop out.

“It was bizarre,” said Morgan, a Greenville Republican. But only for a freshman lawmaker. In fact, the unrecorded practice of lawmakers securing commitments for preferred candidates has quietly steered judicial elections in South Carolina for years.

Despite 18 open judicial seats, on Wednesday, there were no contested races after a round of commitments led to several candidates dropping out.

That means yesterday’s Statehouse judicial elections, as usual, involved no public debate and candidates were elevated to the bench through perfunctory votes.

FLY IN THE OINTMENT

These State Representatives are a new tribe of constitutionalists challenging the secretive insider practices of establishment Senators and Legislators. Representative Jonathan Hill, Rep. Josiah Magnuson, of Spartanburg, Rep. Stewart Jones, of Laurens, and Rep. Adam Morgan, of Greenville make up a new guard of elected officials. These young guns are challenging the establishment on everything so as to provided fairness for S.C. residents and government transparency.

This new group of S.C. legislators are working to end the era of antebellum, aristocratic, S.C. legislative lawlessness.

ROLL CALL – RESIDENTS WANT TO KNOW WHO PICKS THEIR JUDGES

After Rep. Jonathon Hill, of Townville, attempted to force recorded roll call votes on each of the seven judicial races which were originally contested before the contenders dropped out of the race.

Hill’s efforts were ignored by Senate President Harvey Peeler, who presided over the assembly.

“Article V of the South Carolina Constitution requires the elections of judges be conducted on the record,” Hill said. “However, the legislature routinely sidesteps this requirement by convincing the challengers in contested judicial elections to drop out of the race before the election, so that the remaining judicial candidates can be elected off the record with a voice vote.”

During the joint assembly, Hill appealed to Article III, Section 20 of the South Carolina Constitution, which states that elections cannot be conducted by voice votes unless there is unanimous consent.

Hill was initially successful. After some debate, President Peeler honored Hill’s request for a roll call vote on the election for Circuit Court At-Large Seat 13. But on every subsequent attempt, Peeler ignored Hill’s request, pretending not to hear him—even though he was joined in his objections by others. At the time, Hill was standing directly in front of President Peeler on the floor.

A group of legislators were then confronted by Minority Leader, Democrat Todd Rutherford, Richland telling them emphatically to “sit down.”

After repeated failures to be recognized by President Peeler, Hill walked out. He was joined by Rep. Josiah Magnuson, of Spartanburg, Rep. Stewart Jones, of Laurens, and Rep. Adam Morgan, of Greenville.

Hill and the others denounced the judicial election proceedings as constitutionally unsound on Facebook live, calling the election a “farce” and “a sham.”

“They initially recognized Jonathon [Hill], and then they steamrolled him,” Rep. Josiah Magnuson said in the video. “Clearly everybody heard him ask…and clearly everybody heard me ask for a roll call….it is required under the state constitution to have a roll call…and they initially acknowledged that, and then they steamrolled over him….I can’t stand for that. If we’re gonna have farcical judicial elections, I’m not gonna participate.”

Rep. Stewart Jones stated, “What we have in here right now is a sham on South Carolina. It is a sham on our judicial election process.…I’ve got a real problem with that….steamrolling this through today like they’re doing.”

Rep. Hill stated in the video that “Article III, Section 20 of the constitution says that the only way you can have a voice vote on an election in the State of South Carolina is by unanimous consent, and I was depriving them of that unanimous consent, and they flagrantly ignored that in violation of the constitution. I went right up to the podium, and yelled at the top of my lungs at the right time, and he still ignored my objection and my call for a roll call vote.”

“We’re gonna continue pushing for judicial reform,” Hill concluded. “We’ve got to have a judicial selection process that is legal, that is constitutional, and that is moral, and right now we have none of those.”

Establishment leaders, including Horry County Senator Luke Rankin, defend the system. They insist there’s nothing wrong with legislators discussing votes or suggesting candidates withdraw to spare them the potential embarrassment of a loss.

Said one of Rankin’s best friends, and co-Judicial Merit Selection Committee member, Todd Rutherford, “It’s just like a bill — if you’ve got one and nobody likes it, why do we have to waste our time voting on it?”

Under that process, the president has the power to nominate candidates for Supreme Court and other federal judge positions based on the Appointments Clause of the United States Constitution. This clause empowers the president to appoint certain public officials with the “advice and consent” of the U.S. Senate.

South Carolina and Virginia are the only two states in America where lawyer – legislators appoint judges. Many of these same lawyer- legislators then later try cases in front of those same judges.

ON FRIDAY – MYRTLEBEACHSC NEWS WILL GIVE A “TIME LINE” CONTEXTUAL HISTORY OF HOW SC GOT HERE, FROM THE CIVIL WAR FORWARD

How to find love