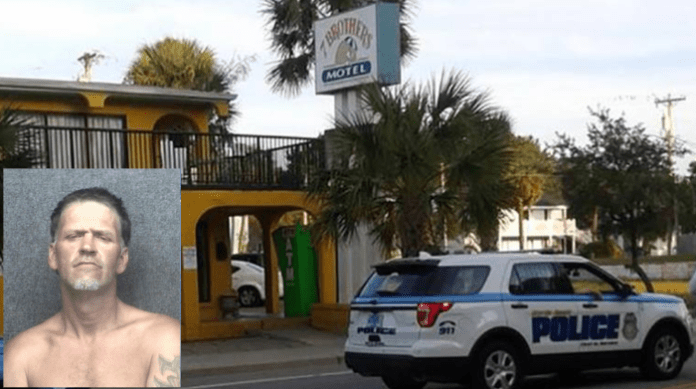 Samuel Robert Sellers has been charged with swinging a machete at a motel guest while stealing $45 from him.

Myrtle Beach police arrested Sellers for swinging a machete at the guest’s face.

Police were called to the Seven Brothers Motel located at 103 North Ocean Boulevard in downtown Myrtle Beach on Monday, May 24th for a reported assault.

This section of town, located on Ocean Boulevard, is noted as having an ongoing history of high crime.

Once Myrtle Beach Police arrived, the victim told the officers a man swung a machete at his face and took about $45 from him in one of the rooms. The police report notes that the victim had a large cut above his left eye.

According to the MBPD police report: During the investigation, police found fresh blood outside and inside of the room where Sellers was. Police also found a machete, large knife, and cash that had blood on it.

The downtown City of Myrtle Beach can get very colorful from late May right through until the end of the Summer season.

Sellers is charged with armed robbery, assault and battery of a high and aggravated nature, possession of a weapon during a violent crime, and several drug charges.