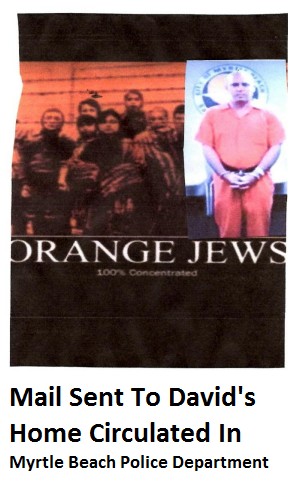 An anonymous source inside city government mailed the former owner of the Oasis Motel a Myrtle Beach Police Department Orange Jews flyer. The source said the flyer was being passed around by city police officers.   The flyer reads,  Orange Jews,  100% concentrated. The former Oasis Motel owner, Shai David, is a Jew by birth.

Mr. David was arrested by Myrtle Beach city police after defending himself from an attack at his property on November 17, 2015.

Mr. David says he sold  the Oasis Motel under duress, after harassment from various city government departments including the Fire Marshal, the Downtown Redevelopment Corporation, the Myrtle Beach Police Department, and Construction Services.

UPDATE:  CORRECTION:  Feb. 21,  The city employee in the video above taking pictures,  met the man who owned the hotel after it was damaged and introduced himself as Bruce Boulineau.  The daughter-in-law of Mr. Boulineau has informed us that this is not her father-in-law. We are now in the process of determining who this gentleman (wearing the strap)  is and why a city employee would choose to lie to a hotel owner.  He drove up in a city provided vehicle. 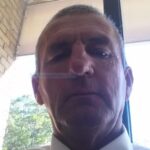 The real Bruce Boulineau, City Construction Services (not the photographer in this video)

Video Surveillance cameras (shown in video above) at the Oasis motel capture Fire Marshal Bruce Arnel kicking in and damaging a railing at the motel.  The cameras show the Fire Marshal hastily leaving the area he just damaged as city construction manager, Bruce Boulineau takes a snapshot.   A citation was later given to Mr. David from the city stating the railing was damaged and demanding it be immediately fixed or the motel would be closed.   This citation was given during the Oasis’ peak Summer season when the hotel was completely full.  The railing was damaged just two days after Mr. David went on local TV complaining about the city not maintaining the former Pavilion area just off the ocean.

Inside city sources also leaked the below email,

where councilman Wayne Gray expresses an interest in acquiring Superblock properties (including those owned by Shai David),  the owner of the Oasis Motel.

Mr. David has since liquidated much of his properties and sold them to Myrtle Beach city government.  He says it was clear he was unwelcome in the area the city has long had a desire to purchase and redevelop.  Mayor John Rhodes now states that the city has held intentions of purchasing these properties for the last 3 to 4 years.  Sources inside Myrtle Beach city government tell us that the Oasis Motel is now under contract by the Myrtle Beach Downtown Redevelopment Corporation for purchase as well.

Jack Rabon was charged with attacking Mr. David at Mr. David’s property.  Rabon’s lawyers,  McNair Law Firm, are now hoping for a large “cash” financial settlement from David.  David shot Rabon in front of his property after being brutally beaten by Rabon who arrived with a Glock, baseball bat, knives, and brass knuckles in his truck to confront David.   Judge Steven John denied David’s “stand your ground” motion this past week, in part,  because John felt the audio of David asking Rabon to “show me your hands and get on the ground” was too faint to make out.   MyrtleBeachSC.com investigated and found that audio enhancement equipment on the audio could have been purchased for as little as $357.   The matter now goes to a jury.

Of the eight city managed Myrtle Beach police department pole cameras overhead only 1.7 seconds of a more than 1 minute 34 seconds of the attack were captured.   Only the body camera of Mr. David captured large portions of the attack.

Final portions of the audio were faint as Mr. David had moved four car spaces forward searching for Mr. Rabon who he believed was armed with the Glock in his truck.  The audio from the body camera was recorded from inside Mr. David’s van three spaces back.  Tests showed Mr. Rabon never fired the gun he had brought to the property. EDITOR’S NOTE:  MyrtleBeachSC.com is in possession of an email sent to City Manager John Pedersen by Shai David in August when the flyer was first mailed to him. In the email, Mr. David expressed concern and asked the City Manager to investigate this issue.  Mr. David informed us this week that the email received no initial response.  After a second email was sent,  Mr. Pedersen did email asking David to call him.  As his properties were at that time in negotiations with the city,  Mr. David did not make that phone call.