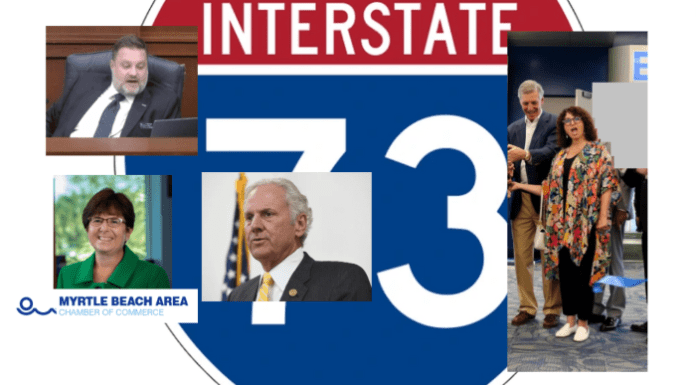 If you have been following the news, then you have certainly read about the off again and on again efforts to fund I-73.

Funding for a Highway 90 project, though, did win a vote of approval from the council committee on Tuesday. This measure is popular with Horry County residents. The I-73 funding idea is NOT popular in rural Horry County.

At that presser, McMaster will supposedly ask the S.C. General Assembly to earmark $300 million in Covid monies towards I-73. Key members of the local Horry County legislative delegation were not informed of the Governor’s visit, however.

Notification sent several to Facebook today to weigh where their constituents stood on the issue.

MyrtleBeachSC News reached out to legislators and state senators today. The consensus there was the same.

I-73 is unlikely to receive any covid funding despite the Governor’s ask. In fact, all the Governor can do is ask. He can not make such promises in a press conference on behalf of the General Assembly.

Should Governor McMaster follow through on his commitment to the Myrtle Beach Area Chamber of Commerce on Monday, the event will amount to a front page presser of empty promises.

The mood in Horry County and in the General Assembly is clearly against this connector road.

The price tag is more likely to come in at $3.6 Billion.

The Interstate will not bring in industry. Were that true, I-20 would certainly have brought industry to Florence, S.C.

The real estate industry in Horry County does $30 billion annually.

Real Estate is the prime economic engine in Horry County. I-73 would be nothing more than a tax free road funded for rural Horry County development.

Should McMaster show up on Monday, a group of Horry County local legislators are planning their own press conference opposing I-73.