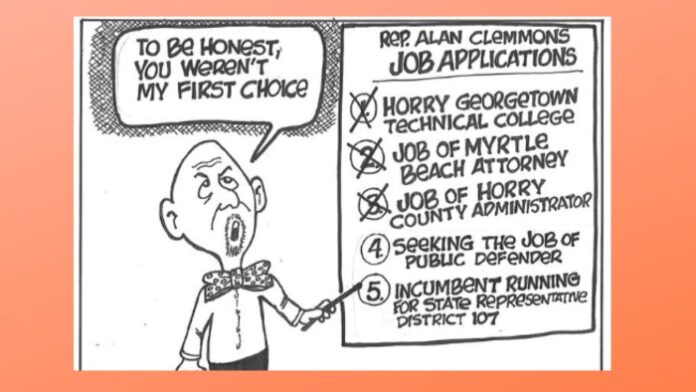 Sources close to the “five-person 15th Circuit group” choosing the next 15th Circuit public defender have informed MyrtleBeachSC news that Alan Clemmons was not selected to fill the position.

State Rep. Alan Clemmons, R-Myrtle Beach confirmed to MyHorryNews, on May 7th, that he was one of the lawyers hoping to replace Orrie West, who will retire Aug. 1.

Applications for the job were taken through March 30, and the local board was scheduled to name a replacement by May 15th according to local chairman Scott Bellamy, who heads a five-person 15th Circuit group that loosely oversees the office.

In April 2019, Clemmons applied for the job as Myrtle Beach City Attorney. Wrote Clemmons at that time, “Thus far, the highlight of my professional service to Myrtle Beach has been, for over half that time, to represent her citizens in the South Carolina General Assembly,” Clemmons wrote in his cover letter to the city. “To apply my professional skills, at the close of my elective service and during this pivotal time in our city, to serving Myrtle Beach City Council as its members chart our city’s future course would, if offered, be the capstone of my career.”

Mr. Clemmons was unable to secure this job.

Clemmons has now made it clear to District 107 City of Myrtle Beach voters that he is looking for other employment.

This comes at a challenging time.

Clemmons is being challenged by Myrtle Beach Attorney Case Brittain. Brittain, and his family, are long standing City of Myrtle Beach locals. The family is highly regarded.

Case Brittain has run a very strategic and disciplined campaign.

Fiscally conservative groups have also targeted Clemmons as below

Primary voters go to the polls on June 9th.