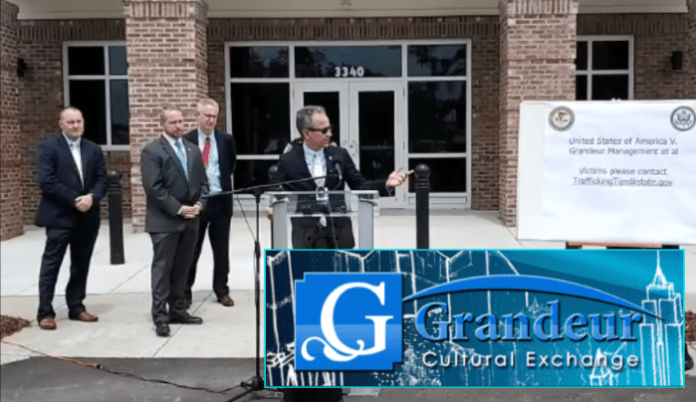 The indictment alleges that Raja Imran Younas – the registered agent, president, and chief executive of Grandeur Management, Inc; the registered agent and Chief Financial Officer of Premier Laundry and Linen Supply LLC; the registered agent of Cenet USA LLC; and a 50% interest member of Hospitality Service Group LLC; Syed Rehan Naqvi, the registered agent and organizer of Rida Naqvi LLC; Jessica Voight, an employee of Grandeur Management; Hospitality Service Group LLC and the aforementioned businesses devised a scheme to defraud workers outside the United States to work for the defendants.  It is alleged that the conspirators not only submitted false and fraudulent visa petitions but also mispresented the positions, duties, rates of pay, working conditions, and living conditions to collect unauthorized and improper fees from aliens seeking H-2B nonimmigrant visas.

According to the indictment, the conspirators would and did use separate accounts in order to pay employees differently based on their current nonimmigration or alien status in the United States.  It is also alleged that, despite promising the workers full-time work, the conspirators provided less than full-time work and consistently paid the workers less than the amount states in the workers’ contracts and in the applications the defendants submitted to the United States Department of Labor and the U.S. Citizenship and Immigration Services.

The indictment further alleges that part of the conspiracy is the  misrepresentation that the conspirators maintain an established international cultural exchange program designed, on the whole, to exhibit or explain the attitude, customs, history, heritage, philosophy, traditions, and/or other cultural attributes (arts, literature, language) of the participant’s country of nationality in order to obtain authorization to sponsor Q-1 visas; when, in fact, once the nonimmigrant employees arrived in the United States, they were placed by their visa sponsors into inward facing housekeeping jobs, with no real opportunities for cultural exchange.

According to the indictment – Younas and Naqvi signed petitions for alien workers containing material misrepresentations; Voight and others conducted interviews with the alien workers over the internet and instructed them on how to wire unlawful visa fees charged by the conspirators; and collected the unlawful fees.  The indictment further alleges that Hospitality Service Group, Rida Naqvi, Grandeur Management, Cenet, USA and Premier Laundry and Linen Supply did not provide the hours and wages promised to the workers in their contracts or represented in their applications to the Department of Labor and the U.S. Citizenship and Immigrations Services.  Hospitality Service Group is also charged with petitioning for individuals who never worked for the company.

The maximum penalty the defendants could receive is twenty years imprisonment.

“Our nation’s visa system is an asset that provides much-needed resources to our communities and valuable opportunities to foreign workers,” said Acting U.S. Attorney DeHart.  “Those in South Carolina who exploit the system and its workers will be brought to justice by our office, while we rescue and restore victims in the process.”

“While the allegations in the indictment speak for themselves, our office is seeking the public’s assistance to identify all potential victims,” continued Acting U.S. Attorney DeHart.  “If you and/or someone you know may have been victimized by the defendants’ alleged scheme, please contact our coordinated support services at [email protected].”

“The Diplomatic Security Service (DSS) is committed to protecting the integrity of H-2B, B-2, and Q-1 visas, and all U.S. visas and travel documents that assist U.S. companies to legally employ foreign workers,” said DSS Special Agent in Charge Edwin Guard of the Washington Field Office.  “This case is the result of working with the U.S. Department of Justice and our other law enforcement partners to interdict visa and passport crimes and stop criminals from reaping illegal income by exploiting U.S. visas, passports, and foreign workers.”

“The Myrtle Beach Police Department, along with our community, remain committed to holding persons who victimize anyone here in Myrtle Beach accountable for their crimes,” said Myrtle Beach Police Chief Amy Prock.  “This case and these arrests demonstrate our commitment and the partnerships we have with our federal law enforcement colleagues.  We are here to help and will always stand up for those who need us.”

Acting United States Attorney DeHart stated that all charges in indictments are merely accusations and that all defendants are presumed innocent until and unless proven guilty.