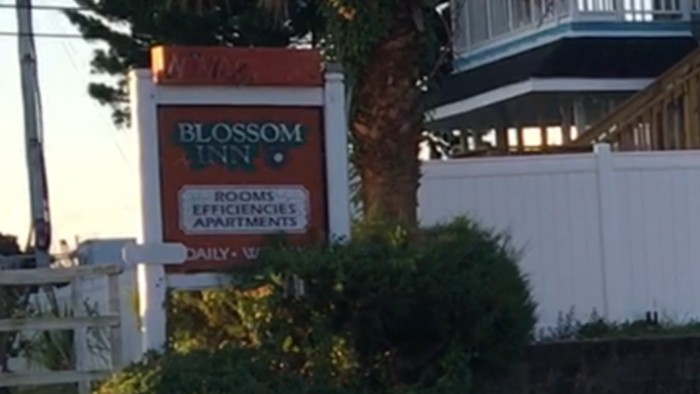 The current Myrtle Beach Heroin Epidemic was addressed last night by the city of Myrtle Beach.   In 2015,  the Horry County Coroner’s Office reported 72 people died from a heroin overdose. Through early August 2016, our area has already had more than 36 deaths to date.

This morning, we took our cameras downtown to speak with area merchants to determine the root source of this pandemic.   While none were willing to go on camera,  merchant after merchant pointed us to the property located on 403 5th Avenue North, Myrtle Beach, S.C.

The property is in the heart of downtown Myrtle Beach,  just one block from the beach.

The property has a business license in the name of Elena Lautman.    The property is called the Blossom Inn.

“This is the heroin capital of Myrtle Beach,” said local businessman Shai David.  He added, “The local police know it well.”     Another downtown merchant pointed to a back entrance to the property down an ally.  “This is where the deals happen,” he said.

I started my car up the ally,  but chose not to go in as the ally had a dead end at the back entrance.

Over six downtown merchants we spoke with agreed that the Blossom Inn was a key association to the Myrtle Beach heroin epidemic.

We reached out to Mayor John Rhodes, Police Chief Warren Gall, Councilman Wayne Gray, Councilman Randal Wallace, Councilman Mike Lowder, Council Woman Mary Jeffcoat, and all other councilmen by email for comments today.   No one had responded by the time of this article.

We also reached out to  the number we had for Elena Lautman.  No one ever answered the phone posted for her.

The number for the Blossom Inn on Yelp and other business listings has been disconnected and no longer exists.

Mayor Rhodes Headed Back To China