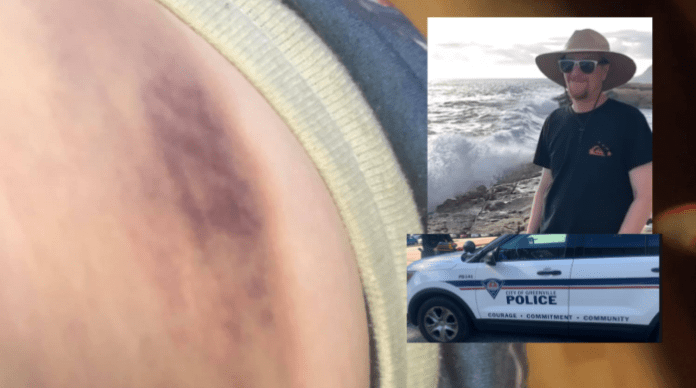 The official arrest records of Matthew McDaniel were provided to MyrtleBeachSC News today.

In an article we ran on June 6th, Matthew McDaniel commandeered a microphone at the Rock The Red conference after the event ended. The arrest records show he was charged with a misdemeanor crime. McDaniel was charged with disorderly conduct. The charge carries a $100 fine and up to 30 days maximum jail time.

No weapons of any kind were found in his possession. Highlighted in yellow below, the arrest record states that his actions were not gang related. The arrest records do not tie McDaniel with any connections to Antifa. The Rock The Red conference organizers continue to make those claims.

The multiple bruises to his body were also made public. We will not be showing those here.

A local former Myrtle Beach attorney, Jim Wiles, informs us that Event Organizer, Pressley Stutts, contacted him and told him “Flynn had left the facility before the mic was commandeered.”

On June 10th, Stutts reached out to us with this comment, “What I told Jim was that Flynn had left the ballroom.” [But Caton had no idea where Flynn was.]

Note this group’s version of what transpired.

No group in Horry County is more hard core conservative than MyrtleBeachSC News.

The just above is not conservatism. The just above is hero-cult glory worship of people who are nothing more than men. It is also propaganda. However, we will let our readers decide for themselves if the statements in these media are accurate.

They certainly do not line up with the official Greenville Police arrest records.

To those who follow Tracy Diaz’s Propaganda, we note:

All the glory belongs to YOU, God. … Deuteronomy 10:21, YHWH the LORD ” alone is your God, the only one who is worthy of your praise, the one who has done these mighty miracles that you have seen with your own eyes.”

Führer original German Definition running from 1933 to 1945: Glorious Leader. The Hero Of The German Peoples.

Where will this hero worship of mere men lead Horry County and this Nation? Time will tell.

WANT TO KNOW MORE ON MCDANIEL? News Items Leak Out On History Of Alleged “Rock The Red” Villain