Social media certainly comes with its own good and bad. It has definitely proven to have its positive qualities such as connecting long lost friends and family or grandparents being able to visit online with their grandchildren. Negatives are just as many with bullying, fake news and wasting of time and resources. Either way, social media can be either a form of connecting or disconnecting. Its use is determined by the user.

This weeks “People Empowering People” article highlights how people have become empowered on social media and how it can be a tool to inform and empower others.

On March 1 of this year, a recent Horry/Myrtle Beach transplant from Boston posted to a local social media site. She explained she had gone to pay her taxes at the Horry County Tax office in Myrtle Beach. Nancy Camacho has lived in the area for approximately one year and when her house closed, she was given a Myrtle Beach parking sticker. This sticker is important to Nancy because as she explained on her post, the Beach was one of the main reasons she chose to retire to the area and being she is disabled it is very therapeutic for her to take her dog and go for a good walk.

The day Nancy posted this she was very distraught because she received no parking sticker upon paying her new tax bill. The teller at the tax office explained to Nancy she would not receive a permit, and the issue was because they had made a “mistake’ last year and then went on explaining to her that she has never been in the ‘actual” City boundaries. Of course this left a great question mark in Nancys head. No one was explaining it thoroughly so she turned to social media.

By the time I read Nancys post many people had replied. Some were suggesting she reread her tax bill, some were asking her address, some asking her if she was in a donut hole, did she pay City taxes, did she have refunds or exemptions? Nancy explained she had never heard of a donut hole, stating that the advertisement listing for the property as well as her real estate agent told her the property was in the City of Myrtle Beach. It was evident she was becoming more perplexed and confused as the post grew with well intended residents of the area. The concern we have for one another is amazing in our community and this was only one example. Nancy has connected with a group that sincerely hoped her issue could be resolved.

After reviewing the post for a while, I private messaged Nancy and we connected. I was able to call her and she gave me more information, and indeed, after pulling up her tax bill and reviewing, her property is in fact in a donut hole. Donut holes are areas where property is within the city limits, but service is provided by the County.

The City of Myrtle Beach does not provide services to those whose property are in a donut hole but may even lay directly in the middle of the City. 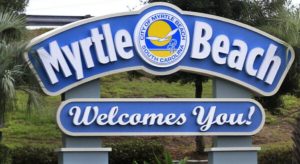 This means Nancy will receive no services, including emergency services, no free or discounted City library card, no reduced prices to City facilities and especially not a free parking sticker. As well these Citizens have little if any say in Myrtle Beach City Council and no voting rights on any issues that affect them, many at their own back door. What the City and the County are doing to alleviate this is vague at the moment as the only time Citizens really rile is when they find they have no voting voice during election time.

Nancy is sorely disappointed and even regretting her decision to move to Myrtle Beach. She is 59 years old and since she has lived in the area, just off 29th Avenue N and within the City limits of Myrtle Beach, ­her home has been broken into. During the break in the thieves stole her deceased dogs ashes that were in a small locked box, and kicked her other small dog causing almost death and then locked it in the bathroom.

They also stole a huge amount of valuables including her social security and disability cards among other items of value which will now keep her from moving ahead with her retirement plans. Nancy was incredulous that they even stole her makeup! As we spoke she was on her way to her new “job” as a pet sitter for an agency she had found which accommodates her disability, lamenting that a year ago she did not see this as her future.

Condolences are not enough for what Nancy has experienced over just one single year at the hands of our arbitrary City and County leadership, but she has become Empowered to keep going on and fighting the good fight. Many of her days are spent at the Horry County Court House being proactive in keeping the burglars in jail. She opines that the thefts had occurred so long in the area that one had already earned the nickname of “The Peppermint Bandit”, and worries that an elderly neighbor eventually went out and purchased a firearm to defend herself. She stated that she knew something was amiss when she called 911 for law enforcement to her home and the City Police said they could not file the paperwork but the County Police would instead.

Donut holes are only good if they come from a donut shop. The center is good and gooey, but not very satisfying unless there are a lot. Otherwise it appears a voluntary program initiated this process years ago when many had an option to be in the city and pay City taxation or remain with the County. Either way, Citizens have a right to know where their property lays rather it be in the City,  in the County or in a donut hole.

Though the City and County say they are cooperating with each other as much as possible in the emergency situations, it does not give Nancy and many who are unknowingly in the donut holes much comfort as far as how the City and others misrepresent their location, Because of this she and her friends are becoming more proactive in Empowering themselves in reading local laws, visiting Council meetings and being more vigilant in expressing their concerns on the social media forums available in the area.

Thank you Nancy for reaching out to a strange area of people where you know few. Stick with your friends, and hop on Facebook anytime you have a question, or just to see cute doggie pictures. We’ve got you covered.