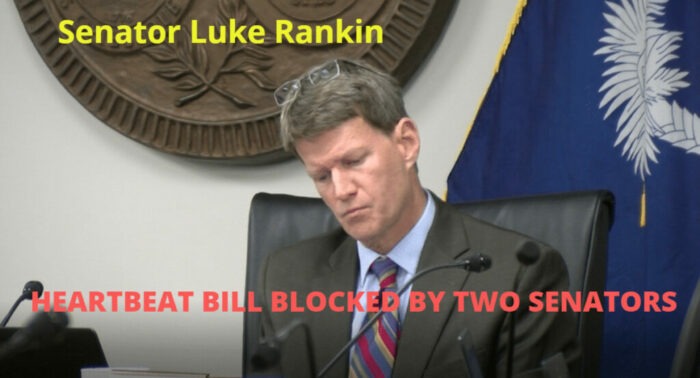 “What residents find most troubling is that Senate leadership is not allowing a roll call vote on the bill. A roll call vote is one in which each senator votes “yea” or “nay” as his or her name is called by the clerk, so that the names of senators voting on each side are recorded. “

There are 46 S.C. Senators. Horry County residents agree that Hugh Leatherman of Florence and Luke Rankin of Conway are the two most powerful in the state. Both of these powerful leaders were once solid Democrats who changed the D behind their names to R once the South started turning red.

The person-hood bill mandates that life begins at conception. The watered down 6-week ‘fetal heartbeat’ abortion ban states that abortions can not be performed once the unborn child has a heartbeat.

Despite having a 12 vote majority in the S.C. Senate, Majority Leader Shane Massey, R-Edgefield told local news, “From my impression right now is we don’t have the votes. I think it’s good policy, if there’s a heartbeat there’s a life and we ought to protect it. But, it’s pretty clear to me based on where we were two years ago and nothing significantly has changed since then, that we don’t have the votes to pass it.”

What residents find most troubling is that Senate leadership is not allowing a roll call vote on the bill. A roll call vote is one in which each senator votes “yea” or “nay” as his or her name is called by the clerk, so that the names of senators voting on each side are recorded.

Governor Henry McMaster held a pro-life rally Jan 7th at the S.C. Statehouse with residents and activists. McMaster wants this legislation passed in 2020. He stated that should the senate pass it, he will sign it immediately.

MyrtleBeachSC News has been informed two S.C. Republican Senators are holding up the bill. Powerful Senators Rankin and Leatherman could demand a roll call vote. Yet, we have been informed they want just the opposite.

Rankin and Leatherman refuse to demand the S.C. Senate go “on the record” with a roll call for this vote.

Today, MyrtleBeachSC News spoke with Lisa Van Riper, who stood with the Governor and also spoke at the rally. Said Van Riper, “Amazing that the senate can’t find 2 votes to end debate and pass a bill to protect the heartbeat of unborn humans but can find time to introduce legislation to protect turtles. Why not do both? “

SAVING THE LIVES OF REPTILES

A bill was introduced in the South Carolina Senate that would “ban the commercial trade of native reptiles and amphibians in the state,” the Center for Biological Diversity said in a news release. That bill is expected to pass.

Senator Luke Rankin is also famously known for losing $7 billion as Senate Oversight Chairman of the Santee Cooper Nuclear debacle. Horry County residents are now on the hook to repay the $7 billion lost in the nuclear controversy.

As a result of the lost $7 billion, a 2018 study shows that South Carolina pays among the highest utility bills in the nation.