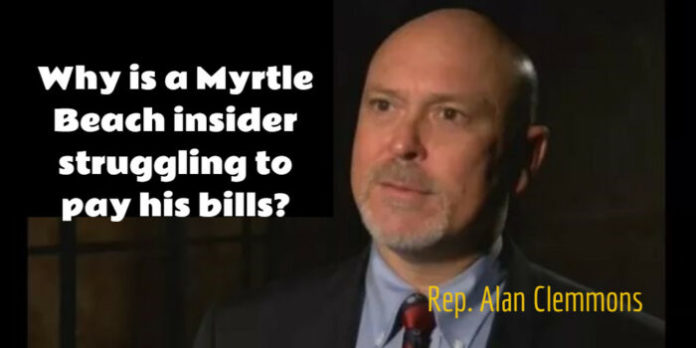 Why does Representative Alan Clemmons struggle to pay his bills?

Alan Clemmons is the insider’s insider. Local hotel leader Matthew Brittain takes and returns his call at the drop of a hat.

State Rep. Alan Clemmons owes nearly $14,400 in taxes on nine properties listed to him and his wife, according to records available on Horry County’s online tax payment website. How is that possible?

Does Rep. Clemmons want to be behind on his taxes?

His colleagues claim that Mr. Clemmons has no desire to see his name printed on the front page of the Sun News.

However, according to the local Sun News, paying taxes late on these properties has been a trend for Clemmons in recent years, as the county’s tax website shows he and his wife paid $17,440 between May 2018 and October 2018 on 2017 taxes and about $17,100 between in June 2017 on 2016 taxes. Those numbers include a Myrtle Beach property that the couple sold in May 2018, county land records show.

The U.S. Public Interest Research Group, a consumer-focused nonprofit organization based in Washington, D.C., released its annual report on state transparency websites in March 2015. The report, entitled “Following the Money,” measured how transparent and accountable state websites were with regard to state government spending. According to the report, South Carolina received a grade of C+ and a numerical score of 78, indicating that South Carolina was “Middling” in terms of transparency regarding state spending.

A later report published by the Heritage Foundation titled “Economic Freedom”,
https://www.heritage.org/index/book/chapter-2 , shows a direct correlation between a lack of government transparency, corporate-government collusion, and corporate handouts crowding out the interests of average Americans and small business owners. This is the very system Alan Clemmons has a track record of endorsing and participating in.

A key example is the $24,000 in $1,000 individual sequentially numbered cashiers checks Mr. Clemmons received in 2009 from members of the Myrtle Beach Area Chamber in passing what is now a half billion dollar tourist tax. The majority of that $500 million has gone to the Myrtle Beach Area Chamber for promoting the city of Myrtle Beach to tourists. The majority of the Chamber money went into the hands of 8 Myrtle Beach Chamber created crony companies. A lawsuit has been filed as a result of this murky “not for profit” behavior. Alan Clemmons is on the list of those to be called, deposed and questioned in this lawsuit.

RESULTS OF THE TOURIST TAX

Five families in the Myrtle Beach area have done financially well because of the tax. Those five families property manage the majority of oceanfront hotels along the coast.

As for tourism, Myrtle Beach now features lower end clients and shorter stay guests than before the tax was implemented.

Downtown small business owners are blamed for a deteriorating city. Merchants are frequently harassed by police and city staff. City leaders work to ensure vacant buildings owned by local merchants, are just that, vacant. This allows for new, city preferred investors to purchase the property inexpensively.

When the tourist tax passed in 2009, legislators were paid a salary of $10,400 per year. These wages were and still are well below poverty.

However, an October 2010 report by The Nerve showed that S.C. lawmakers received, on average, about $32,000 per year in combined salary, reimbursements and expenses for serving in the Legislature and performing duties and tasks related to their legislative posts, according to an examination of legislative compensation for the previous two-and-a-half-year period.

Total salary and expenses for individual lawmakers in The Nerve’s analysis ranged from a high of $133,529 for the 2.5-year period for Senate President Pro Tempore Glenn McConnell, R-Charleston, to a one-year low of $14,287 for former Rep. Bessie Moody-Lawrence, D-York.

Representative Moody-Lawrence clearly did not understand how the system worked.

Those few in key House of Representative assignments have the best angle at working the system. Mr. Clemmons is no longer among those in power in Columbia. He no longer is given the choicest committee assignments he once held. Those not in power work for the base wage, which has changed little from the $10,000 paid in 2010.

This is why Mr. Clemmons is lobbying to be hired as Myrtle Beach City Attorney. So much so, that he gutted his own civil asset forfeiture bill in hopes of pleasing Myrtle Beach city government leaders Mayor Bethune and City Manager John Pedersen.

We covered why the city wants to keep that law on the books here:
https://myrtlebeachsc.com/why-the-civil-asset-forfeiture-bill-went-sideways/. In short, despite what City Manager, John Pedersen might claim, those legally stolen monies and assets from tourists help cover the cost of operating the city police department.

Today, Mr. Clemmons finds himself on the wrong side of the very system he participated in for the past 17 years. He has limited committee power, and thus must work for his low-paying state wages only. He also has little time to spend managing his downtown real estate law practice.

This wealth for the few, poverty for the largess system Mr. Clemmons fostered is a life long history lesson he can now look back on as he approaches 60.