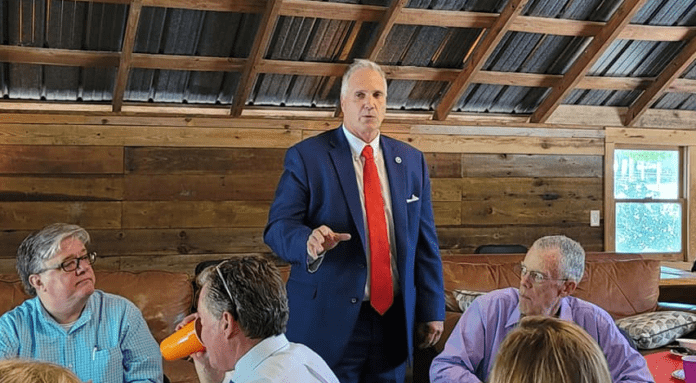 (North Myrtle Beach, SC)…South Carolina State Representative William Bailey announced today that he has decided to seek re-election to the General Assembly rather than mount a campaign for the 7th District congressional seat.

Rep. Bailey was the first to announce a run for congress after incumbent Congressman Tom Rice voted to impeach President Trump in 2020.

Rice was one of only ten Republicans in congress to vote against the president.

Rep. Bailey on January 26th announced the formation of an Exploratory Committee to examine the possible of running for congress. “After seeing our Republican Congressman Tom Rice vote to impeach President Trump. I was very upset. I supported President Trump and I did not want to see Congressman Tom Rice go unchallenged for the Republican nomination in 2022 so I decided to explore the possibility of running for congress.” When Rep. Bailey announced his exploratory campaign he said, “In times like these, we need a strong conservative voice in Washington to represent the people of the 7th District. It’s now obvious to everyone that we do not have that voice”.

Bailey announced today, “Now that we clearly have a number of strong conservatives that most likely will jump into the race and challenge Rice, I’ve decided to seek re-election to House District 104 and continue to focus my efforts on helping the people and businesses of District 104.”

Bailey said he has gotten hundreds of phone calls, texts and emails about running for congress.

He  said that there were folks from all over the district, state, and even the country that expressed their support.

The South Carolina Republican Party, in an unprecedented action,  voted to censure Congressman Rice on January 30th of this year. “I supported President Trump. It is clear to see that what he was doing for the country was working. Since President Biden took over, the country has gone into a rapid decline. With socialist Democrats now in control of the White House, the House of Representatives and the Senate, I will work to help elect someone who will stand up and fight for conservative values, not vote to impeach them,” said Bailey.

Rep. Bailey, who was elected to the State House of Representatives in 2018 and re-elected in 2020, said he will file for re-election when the official filling period opens in March of 2022.