Residents Beg  Mayor and City Council For Help And Understanding

The town hall meeting quickly broke down.  Many were surprised at the tone communicated by city leaders. Councilmen Wayne Gray, Councilman Randal Wallace, and City Spokesperson Mark Kruea said locals parking in the golden mile were a nuisance.  Councilwoman Mary Jeffcoat then asked those attending to move on to a new topic.

On July 5th,  Myrtle Beach City Council began charging local residents $10 per day to park on the beachfront.   Residents who live in doughnut holes inside the city and locals who live outside the city are required to now pay for beach access.   County  Residents pay over $6 million to the Myrtle Beach Area Chamber annually in ATAX dollars.  These locals were shocked when the Mayor proposed a $300 annual parking fee for local county residents Tuesday night.

Mayor Rhodes and Councilman Wayne Gray said the funds would be used to pay for the  costs of managing oceanfront beach access areas.  Later,  MyrtleBeachSC.com discovered the fees would actually go to a city sponsored organization called the Downtown Redevelopment Corporation (DRC).

The DRC  is at odds with many downtown city merchants.  Small merchants feel harassed by the organization.   The DRC has used an infrastructure bank to demolish buildings in the downtown area.  Many merchants believe their properties will be targeted next.   Most we spoke with were nervous about giving even more funds to the DRC. 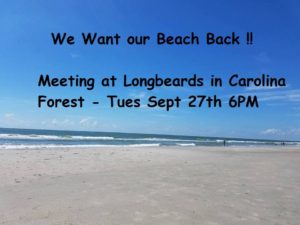 Not feeling heard by city council, however,  local residents have called a meeting at Longbeards this coming Tuesday, September 27th at 6 p.m.

All are invited to attend.