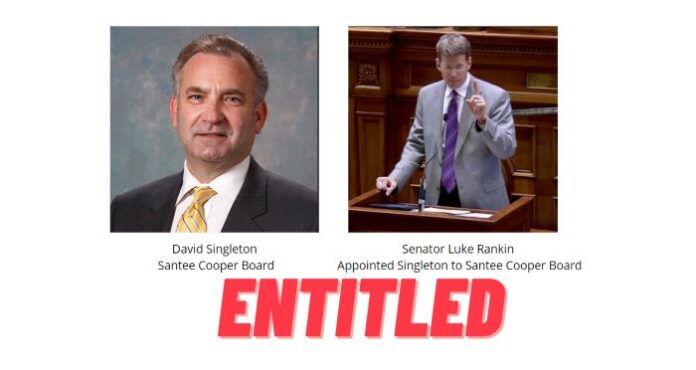 S.C. residents paid an average of $1,753 for electricity in 2018, about $400 more than the U.S. average, according to the U.S. Energy Information Administration. That’s almost twice as much as residents of New Mexico, the state with the lowest residential electricity costs, the report said.

“It means the highest bills” are in South Carolina for electricity, EIA spokesman Jonathan Cogan said.

The Greenville News broke this story in 2018.

As if South Carolina’s spectacularly failed, government-run power provider Santee Cooper hadn’t ripped off the Palmetto State enough over the last few years via the NukeGate debacle, its leaders are once again nickel-and-diming taxpayers and ratepayers.

Santee Cooper received notification earlier this month that its board members – who recently came under fire for their lack of diversity – may have been receiving taxpayer-funded health care coverage improperly.

Actually, that is precisely the conclusion reached by the agency responsible for administering these benefits.

According to a notice tucked into Powerpoint materials for the utility’s Monday, August 24, 2020 board meeting, Santee Cooper was informed on Thursday, August 13, 2020 that the S.C. Public Employee Benefit Authority (PEBA) had launched an investigation into what it described as “board members’ eligibility to participate in the state health plan.”

David Singleton was appointed Santee Cooper Board Chairman by Luke Rankin. If the name Singleton rings a bell, he was the Horry County local who built Belle Terre golf course on land that he knew was scheduled to be purchased by the Carolina Bays Parkway (SC 31).

Singleton built Belle Terre directly in the path of S.C. 31. He did this after the path of the road was approved, yet more than 5 years before the land was purchased with RIDE (Road Improvement Development Effort) Horry County taxes dollars.

WHAT QUALIFIES A MAN TO BE SANTEE COOPER BOARD CHAIRMAN?

We have previously reported on the Coastal Education Foundation and their connection to Horry County RIDE tax dollar recipients. Those articles certainly drew attention. They were eye openers.

David Singleton recently stepped down as Santee Cooper Board Chairman, but still remains on the board.

Singleton is the Chairman of the Santee Cooper Humans Resources Committee. That group is among those who helped decide on the Golden Parachutes of former Santee Cooper C.E.O. Lonnie Carter and others who jumped ship after Santee Cooper lost billions in a failed nuclear energy project. Rate payers will be covering those losses for decades forward.

In retirement Carter receives roughly $800,000 a year in retirement benefits, according to documents provided by the Moncks Corner utility.

The biggest chunk of Carter’s estimated retirement pay will be a $455,191.83 annual payout from Santee Cooper’s pension plan for executives.

As for the premium free insurance provided to David Singelton at Santee Cooper rate payer’s expense:

The plan will be discontinued on December 31st. Santee Cooper is not asking Singleton and the other board members to refund rate payers for these inappropriate expenditures, however.

These payments went on and on for years for the type of insurance rate payers simply can not get in the market place without paying through the nose.