Shooting Suspect: “I will die in the rear of the patrol car. If officers don’t kill me, I Will Kill Myself” 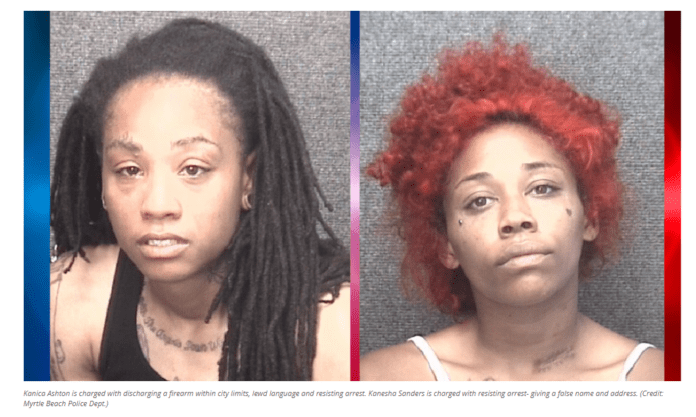 In an article we covered earlier, officers responded Monday to a report of gunshots in the area of 12th Avenue South and Yaupon Drive around 12:20 p.m., according to Master Cpl. Thomas Vest. The two shooters were operating a red car with red wheels and shooting a gun out of the sunroof near the Sea Mist Conference Center.

The two women were arrested at the scene. 27-year-old Kanica Ashton was charged with shooting a firearm off within the city limits, resisting arrest and disorderly conduct.

26-year-old Kenesha Sanders was charged with giving a false name and address, the police report reads.

According to the official arrest report, suspect one continued to tell officers they had the wrong people and the second suspect was actually being shot at. Officers transported the first suspect to the Myrtle Beach jail due to the fact that she said she was going to die in the rear of the patrol car and if officers didn’t kill her then she would kill herself.

The police report states that multiple detectives, supervisors and the crime scene unit responded to process the crime scene and execute a search warrant on the suspect’s room.

Are these two tourists the exception? Or are they the typical tourists that the Myrtle Beach Area Chamber of Commerce marketing efforts bring to the city?

On Memorial Day weekend, the Black Bike week has been cancelled by the town of Atlantic Beach. Official Black Bike Week websites state that the groups are going to Daytona Beach. However, Black Bike enthusiasts repeatedly post on Social Media that they do intend to stay in the City of Myrtle Beach.

Historically, the City of Myrtle Beach sets up a 23 mile one way bike loop which frustrates these tourists. The loop is an unwelcoming message and one held in question by the NAACP.

Despite the ongoing issues between the city and bikers over Myrtle Beach Black Bike Week, the Myrtle Beach Area Chamber of Commerce continues to pour marketing dollars into the very neighborhoods where these bikers live.

Crime tends to be low during Black Bike Week, however, Myrtle Beach continues to be ranked the 3rd most dangerous city in America again in 2021.

City leaders blame the high crime rates on the tourists year after year. Locals point out that they believe the Myrtle Beach homeless situation contributes to the overall crime rate.

One week later, Myrtle Beach hotels and merchants brace for tourists known as the 100 milers. These tourists come the first week of every June.

They live within 100 miles of Myrtle Beach. They are also recent high school graduates from cities located within a 100 mile radius.

The Myrtle Beach Area Chamber of Commerce receives $54 million annually in tax funding to market the City of Myrtle Beach.