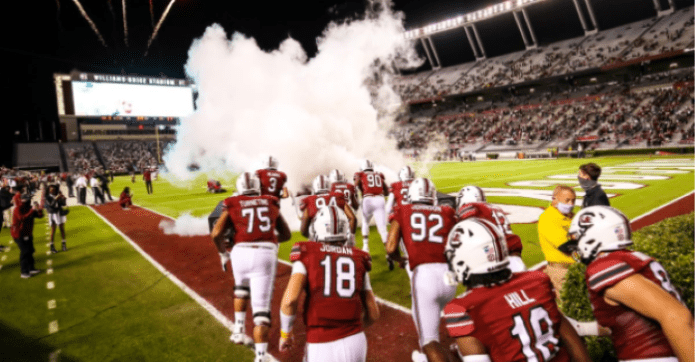 Gamecocks Fall Back To .500 With Loss To Missouri

The South Carolina Gamecocks missed out on another chance to stay above .500 on Saturday, falling 31-28 to the Missouri Tigers on the road.

Inconsistency has been a theme for the Gamecocks throughout the 2021 season. They started out 2-0 only to drop their next two contests. They have alternated betweens wins and losses ever since, and Shane Beamer’s squad sits at 5-5 with two games left on the regular season schedule.

The Gamecocks were largely undone by turnovers (three) and the inability to stop the Tigers’ prolific rushing game. The home club racked up a whopping 258 rushing yards on 46 carries; Tyler Badie led the way with 209 on 34 rushes.

South Carolina found themselves trailing 31-14 early in the fourth quarter, and the 14 unanswered points (two touchdowns from ZaQuandre White) came too little too late.

After cutting the deficit to three, the Gamecocks’ defense failed to get off the field. Missouri used their clock-chewing rushing game to melt the remaining 4:30 en route to a tight victory.

“Just sloppy football,” Beamer said after the game, per Lou Bezjak of The State. “I thought we had a really good week of practice and the mindset was really good throughout the week. We looked like a good team at times, and at times like we had been patting ourselves on the back all week. That is disappointing and it starts with me.” Missed tackles on defense, couple of busts assignment-wise…Just not very clean. That starts with me.”

The Gamecocks will look to rebound when they host the No. 17 ranked Auburn Tigers this Saturday (7:00 p.m. EST). South Carolina opens that game as a 7.5-point underdog at the sports betting sites in the country.

The Gamecocks’ quest to become bowl eligible continues against one of the top teams in the country.

The 6-4 Tigers find themselves in a late-season mini slump, having lost two in a row following a brilliant 6-2 start. The latest defeat came at the hands of Bo Nix and the visiting Mississippi State Bulldogs, who pulled off a 43-34 upset.

The Gamecocks will likely need to rely on the passing game defense to win this contest.

They’re averaging the second fewest points per game in the SEC (23.5), and Auburn is allowing only 22.1 points per tilt. But if there’s a weakness on the Tigers’ defense, it’s the secondary that’s allowing 243.8 yards per game (third most in the SEC).

If South Carolina is to pull off the upset, they’ll need to do a better job of protecting Jason Brown, who was sacked three times against Missouri. White and lead receiver Josh Vann are going to have to have productive days if the Gamecocks are to stay in this contest.

But ultimately, it’s too difficult to go against the Tigers. They’re the No. 17 ranked team in the nation for a reason. They’re far more balanced than the Gamecocks, who have even struggled to contain less prolific offenses than Auburn’s.

The Gamecocks’ defense will keep it close for a while, but Auburn will ultimately pull away in the fourth quarter.

The Gamecocks will conclude their regular season with a home tilt against the Clemson Tigers on Nov. 27 (7:30 p.m. EST).

The Tigers, winners of three straight and five of their last six, will look to stay hot when they host the No. 12 ranked Wake Forest Demon Deacons this Saturday (12:00 p.m. EST).

Simply put, it’s going to be tough for the Gamecocks roller-coaster of an offense to hang in there against a Clemson defense that’s allowing only 15.3 points per game (the third fewest in the conference).

If there’s one major reason for optimism, it’s the fact that Clemson has also struggled to move the ball consistently. They’re dead-last in yards per game (344.7) in the ACC, averaging a mere 24.4 points per contest.

South Carolina’s best bet is to lean on the defense and ground game, but it’s still hard to envision them getting past Clemson here. The Tigers are more battle-tested, and they have the advantage at quarterback with D.J. Uiagalelei.

It all adds up to a victory for the Tigers.