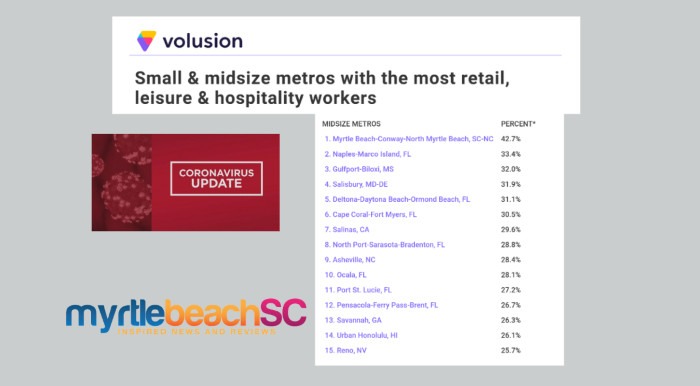 Ecommerce website Volusion ranks the City of Myrtle Beach the number one midsized metro cities in America in a report of cities with the most impacted workforces during coronavirus.

Retail, leisure, and hospitality accounts for 42.7% of all workers in Myrtle Beach.

Writes volusion: Overall, the share of workers in retail, leisure, and hospitality increased steadily [in America] from 1970 to 2016 when it peaked at 21.8%. This trend was largely driven by an increasing share of employment in restaurants and bars, while employment in retail stagnated. Even though the last few years have seen a modest decline in the share of workers in these two sectors overall, more than one-fifth of all U.S. workers were employed in either retail trade or leisure and hospitality in 2019, totaling over 32 million workers.

Mandates from the governor entirely closed this industry the past few months in the Myrtle Beach area.

April 23, 2020 – Americans displaced by the coronavirus crisis again filed for unemployment benefits in historic numbers within the last seven days, with the Labor Department reporting this morning a new surge of 4.4 million claims. Over 26 million people have now filed for unemployment benefits over the past five weeks. Economists were predicting 4.5 million jobless claims for the week. The figures do not take into account millions more who have attempted to file claims in all 50 states, but have been unable to access decades-old claims systems.

“The problem is the economy is still shut down,” Torsten Slok, the chief economist for Deutsche Bank Securities, told NBC News. “The doors are still closed. There is still no smoke coming out of the chimneys in corporate America. Given that it is not surprising that you continue to see significant layoffs.”

Mayor goes on CNN. Huge protest in Columbia. Will Bethune lead by example?