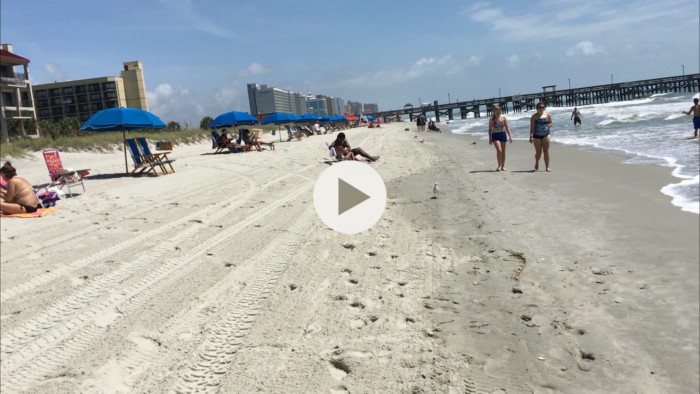 Myrtle Beach city beaches were down today  over the past few weeks as summer tourism slows by half.  Video taken just south of the Crown Reef resort showed only one line of beach chairs at high tide,  with one third of those chairs unoccupied and little to no one in the ocean.

Video taken at a popular Murrells Inlet view restaurant showed one table of diners at peak lunch hour.   Diners are usually packed at this restaurant overlooking the inlet at noon.   The views are breathtaking as they were today.

We spoke with two lifeguards from Lacks Beach service who told MyrtleBeachSC.com that the numbers fell well off today.  They stated that they believed ongoing reports of Jellyfish stings had many would be tourists not coming this week.   We asked them if the stings were still ongoing.  They stated that while they were,  the stings were not occurring at the same high numbers reported last week.

MyrtleBeachSC.com also looked at August advance reporting from over 1,300 condo owners that reserve their units through property managers in the city of Myrtle Beach.   Numbers do indicate a soft ending to the season.   Unless last minute booking suddenly become evident,  it does appear that last week’s traffic has brought and end to the 2016 Myrtle Beach tourism season.

With the sluggish late season numbers,  tourist attractions,  like the below from Ripleys, have now begun to promote discounts across several local media channels as below.

MYRTLE BEACH, SC (WMBF) – Ripley’s Aquarium announced that all residents of North Carolina and South Carolina can buy admission tickets to any of the five Myrtle Beach attractions for only $10 per ticket from Friday, August 5 through Friday, August 26, according to Bethany Marshall, Director of Marketing for Ripley Entertainment Inc.