Taxes and Fees and Fines, Oh My….. 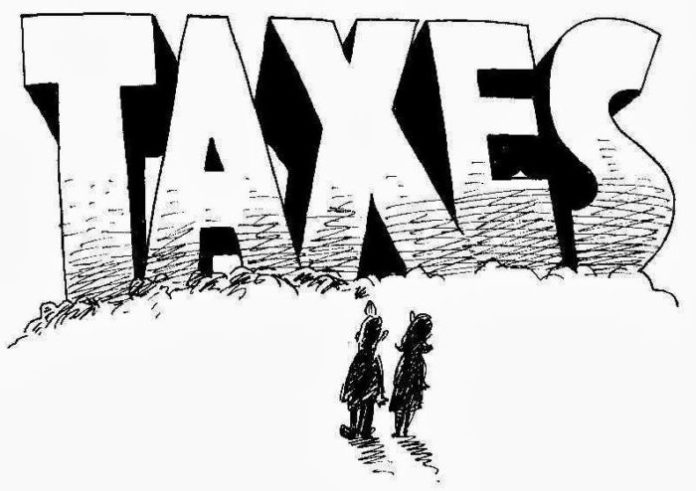 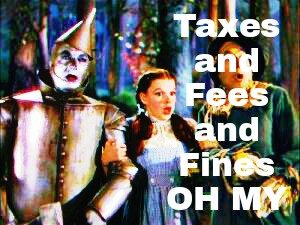 Being an American citizen nowadays can be quite costly if you don’t pay attention and that’s not just at the grocery checkout line where most of us on limited incomes worry so  much about savings that we coupon and join online saving clubs for extra cents off of our everyday purchases.  Most times for every one of us who do pay attention to other costly processes, such as how the government uses our monies, there’s a huge proportion that don’t or can’t pay attention because of “gobbledygook” “phraseology” or basically government “incomprehensible” complications. If only there were an “app” that would say “NO” when you are about to dine at a restaurant or shop a certain grocery store in a certain city which gives the government more money in the last few lines of the bill. Alas, so far there is none.

A simple issue such as government taxation, fees, and fines and how those monies are used is becoming questionable as more and more monies are taken by the government. In turn the government “promises” to better the citizens geographic area and bring the citizen a return through the money they’ve invested such as security and amenities for their area or an increase in property values. Don’t be in a quandary though, even scholars of the highest economic and education standings squabble among themselves regarding taxation. It’s not lost on the average person that as the tax issue grows so does the complications and implications it brings. It is also not lost on the common observer that entire wars have been fought over that very one issue known as taxation.

The Horry County area alone is the largest county East of the Mississippi River. Horry County citizens contribute to the tax base of the county coffers to the tune of millions of dollars each year yet one of the smallest cities by resident population, the City of Myrtle Beach, expects you the citizen, to come to their defense everytime they request more and more of your hard earned dollars. They not only request your regular taxes and fees and fines to propagate their “tourist” trade, but also ask for and receive millions of dollars of your Federal dollars through grant monies simply because they are not good stewards of the money they receive just from their standard tax base.

It’s our hope to educate our readers and those interested in how taxation in our area of Horry County works, and what is taxation, what is a fee and what is a fine. The reason for this very basic tutorial is that our local government has shied away from word meanings so the average citizen will accept any of the above…a fee, or even a fine…as long as it’s not a “tax”. After all, who likes “tax” right?

Example: You’d pretty much have to live under a sand dune to not know there’e been a dark storm brewing over Myrtle Beach, SC. regarding the TDF (Tourism Development FEE) the past few years.  The interesting and operative word used by the government here is “FEE”. The term FEE is a favored among proponents of government. Why? Because first of all the word FEE makes you believe you are GETTING something and you’re not actually being TAXED. But to the demise of the actual citizenry, this FEE is set to expire and be voted on again by the City of Myrtle Beach and the kicker is that it excludes the citizen from an active VOTE, because usually the government does not allow you to vote on a FEE, only a TAX. So not only are citizens cajoled into a false sense of security a FEE brings, they are not allowed a referendum vote to show their support one way or the other.

Example: Although residents who reside year long in their homes in Myrtle Beach are afforded a tax “rebate” worth thousands to some, they’ve not noticed the approximate 20% FEE increase for City services per year for the past 5 years. You don’t even have to be a math genius to realize it’s a 100% increase over the past 5 years alone. If their taxes were increased 100% over 5 years, we’d most surely see marching in the street regardless of the new protest rules passed by City Council.

Another Example: Horry County recently added a $50 FEE per automobile registration. That one FEE added $50 to each of my auto registrations. Having two vehicles, that’s $100 to my tax revenue due the county this year.  Again, as this was initiated as a FEE and not a TAX the citizens of Horry County were denied a VOTE in the process. This FEE is different than the RIDE Initiative which is a TAX. Remember when in November 2016 you actually were allowed to VOTE on that? Well, that was well and fine that we were allowed to VOTE on that initiative, but did we get a vote as to how exactly those funds are to be used? That’s a “horse of a different color” as the Wizard would say….

Stay tuned for the next except…

Myrtle Beach Black Bike Week Is On For May 2022