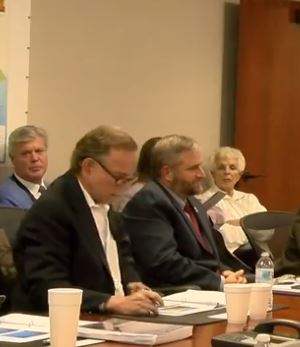 Hail Mary: (noun) “a long, typically unsuccessful pass made in a desperate attempt to score late in the game.:

After the findings of the State Law Enforcement Division were released this past Thursday by 15th Circuit Solicitor Jimmy Richardson, irate citizens are calling for the removal of County Administer Chris Eldridge and County Attorney Arrigo Carotti.

Most readers are already acquainted with the dramatic cries of wrongdoing by both Eldridge and Carotti who strongly inferred new Council Chairman Johnny Gardner and his business associate Luke Barefoot were being underhanded and deceptive. What their ulterior motives were and still are, remain a point of contention at the moment. An in depth account of the debacle can be found here:

Citizens believe this scenario has once again placed the County in a very poor light. Horry County continues to be a huge player in the state economy bringing in billions of tourist dollars a year. Unfortunately its politics continue to be held hostage by crony relationships and poor decisions which has resulted in several costly and lengthy litigation before the courts with many more still to follow.

Speaking of crony relationships, it is important to keep in mind that Chris Eldridge is also on the Board of the Myrtle Beach Area Economic Development Council as well as is past Horry Council Chairman Mark Lazarus. Arrigo Carotti, being the attorney for the county, has a diverse association within many areas of the County Administration.  This incident has caused Citizens to wonder what other associations these actors are involved in. ­These questions should not even be at issue. Horry County deserves to be able to move on under new Chairman Gardner with a Council and Administration that seeks the best for its Citizens, not one mired in continued chaos by back room meetings, poor decisions and crony leadership.

Horry Citizens are at odds after the release of the Solicitors report regarding the SLED , concerned the Council will not take action against the involvment of Eldridge and Carriotti. Many believed the old days of Horry cronyism would be rested on the swearing in of Gardner,

but instead that very day was mired by the report from ‘Fitsnews’ of the alleged extortion. Most proponents for Gardner continue to see that day as “The Last Hail Mary Of Old Horry”, a very last attempt to wrest control from the voters and allow the cronys to keep control of the County. Fortunately it backfired.

And today, just three days past release of the Solicitors review of the SLED investigation most voters are demanding Eldridge and Cariotti to step down or be fired from any positions they hold in any part of Horry County government, including the board of the Economic Development Corporation. What remains in question is in what way the past Chairman Lazarus is/was involved? Speculation swirls, but most are just happy he is gone and believe he will suffer consequences of his greed and poor judgement at the hands of the private sector. It is up to the Economic Development board to either keep or release him, but his and Eldridge’s continued position will not make business very smooth for the entity which annually receives one million dollars of taxpayer money.  Here is a list of the the Board of Directors of the Myrtle Beach Economic Development Corporation:

Today Gardner supporters are questioning if a vote will be taken by Council to dismiss Eldridge and Cariottti at an Emergency Council meeting called for Tuesday at 3:30 pm at County Council Chambers. Some believe the entire Council at the time of the issue should be unseated. A source has stated that private polling of the council remains split as of this writing with the two votes being undecided by Councilman Bellamy and Councilman Servant. Some Citizens are speculating no action will be taken while many social media sites are threatening further action if their voices are not heard.

Research finds there are many in current Council seats that indeed have questionable crony relationships with County business, especially those in the realty industry who are able to sway votes or vote on their own private interests. This must end with either a signed promise to not indulge, to not engage, or to totally recuse themselves in a vote where they could prosper or where their vote is ethically in question. It is time to move on to true leadership and guidance and bring Horry County back to a healthy, strong and united front where transparency, inclusion and opportunity are for all, not just a select few.

Stay tuned to local news Tuesday evening after the Emergency Council meeting. If you are able, attend the meeting Tuesday at 3:30 pm in Council Chambers located in the Horry County Government & Justice Center, 1301 2nd Avenue in Conway. Wear red or blue to show solidarity with your fellow Citizens. Also you can call or email your County Council representative found on this list:

Help return Horry County back to We The People.
See you soon,
Lisa Bean Williams