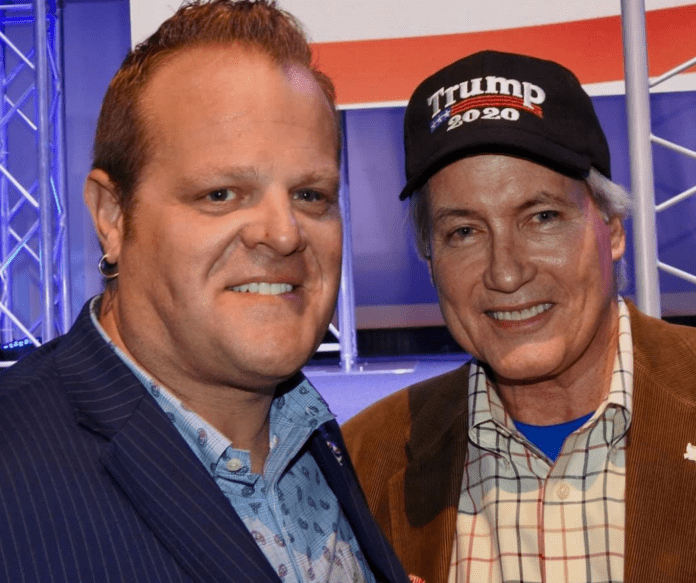 Through his attorney Tucker Player, of the Player Law firm, “Rock The Red” protestor Matthew McDaniel made a press release to multiple media outlets today. His entire statement can be read at the bottom of this article and on SCRBD.

McDaniel released this after remaining silent on the matter for 13 days. Per his Facebook post, McDaniel said he waited until today to press charges against the Horry County GOP EC, Chad Caton, for Assault and Battery.

After hearing this, McDaniel did file a complaint with the Crime Victim Ombudsman today.

Why the Player Law firm waited 13 days to press charges against Caton is curious at best? They had the entire episode captured on video. This certainly gave the Greenville event organizers plenty of time to head the matter off with local police.

Chad Caton Out-Muscles McDaniel On Video And Out-Maneuvers Him With The Greenville Police Department.

Today’s events had to be welcome news for powerful Greenville area activists, like Jeff Davis. Event organizers, including Pressley Stutts, clearly outmaneuvered the Player Law Firm as this matter developed over the past few weeks.

Chad Caton is now clearly one of the most powerful leaders in Horry County politics. He is also among one of the most powerful in the state. The self described “Thug” is the chief muscle behind the new HCGOP. His close connections to Lt. General Flynn, Lin Wood, Jeff Davis, and Pressley Stutts have him keenly positioned to take down anyone running against whichever candidate this group chooses to endorse in the 2022 U.S. Congressional 7th District. If his past sets any precedent, Caton and company are more likely to attack the opposition front runner rather than throw stones at incumbent Tom Rice. This was the pattern he successfully employed in getting S.C. Senator Luke Rankin re-elected June 2020.

In a brilliant strategic move, Lin Wood, HCGOP State EC Tracy Bean Diaz, and conspiracy media effectively got out the false message that McDaniel was somehow connected to Antifa. They also falsely claimed McDaniel was carrying a weapon. They spread this narrative nationally as we published in a previous article here. https://myrtlebeachsc.com/official-greenville-police-arrest-records-for-rock-the-red-protestor-released/

Lin Wood added to the falsehood by attaching the Antifa narrative to his post supporting Caton.

This group fully embraces the shrewd philosophy that the narrative is much more important than the truth.

In their “win at any cost” approach to all things politics, both Chad Caton, and his wife Elizabeth are known for making outrageous and completely false allegations online.

Note Elizabeth Caton’s remarks above. After these were posted, Myrtle Beach resident Scott Pyle reached out to us. “This is an outright lie,” said Pyle. “David Hucks has never pulled a gun on me.”

Jim Furry is a former FBI agent assaulted by Chad Caton at a Dunes Club event. Furry filed an incident report of Caton spitting in his eye. The something Jim Furry was planning was lunch, nothing more.

As to McDaniel’s key responses:

On June, 5 th I attended an event called “Rock the Red” at the Embassy suites in Greenville, SC. I paid the $197.00 entrance to the event that included dinner with General Michael Flynn.

The doors to the banquet hall opened around 6:30 and I took a seat at a table with the other guests. I sat there patiently for several hours listening to the various speakers. The dinner concluded with Flynn giving his keynote speech. After he concluded his speech and dismissed the crowd, I reflected on what I had heard throughout the day and what I had already observed in the previous years with Flynn and Qanon. I thought to myself, I must say something. This is all getting out of hand. All I heard for the last 6 hours was one lie after another. Someone must stand up and tell the truth. I decided that someone was going to be me.

I am a lifelong republican turned independent. I have never, and never will, have anything to do with Antifa.

After the conclusion of the event, I picked up the microphone and began my prepared toast. I said “can I have your attention please, can I have your attention please. I would like to make a toast to General Flynn. Would everyone please raise their glasses for General Flynn” and as people started raising their glasses. Then, I started my toast… “General Flynn is the biggest scumbag traitor in the history of this country, next to Donald Trump.” at which time I was immediately mobbed by some of the guests. Two guests took the microphone from my hand and seized my person. Then another guest grabbed me and body slammed me to the ground. He then picked me up and dragged me across the banquet hall. When I came to my feet, I was still being restrained by the back of the shirt and being pushed out of the banquet hall by Caton. As we started to exit the banquet hall I shouted “Qanon is a Russian psychological operation” and Caton trip-tackled me from behind, slamming me to the ground a second time. You can hear me scream in the video. It took the breath out of me as it caught me by surprise. Upon coming to my feet, another man punched me in the side of the face. At this point, security intervened and escorted me out of the hotel. The police were called and I was subsequently arrested for disorderly conduct and taken to jail.

The perpetrators and the Horry County Republican Party have been defaming my character since the incident occurred. As I said, I have no affiliation with Antifa or Black Lives Matter. I did not possess any weapon or “blackjack” as claimed by Caton. The videos clearly show this.

As we pointed out in a previous article, McDaniel worked with several upstate police agencies in solving cold case files.

These police departments point out that the investigations could not have been solved without McDaniel’s efforts.