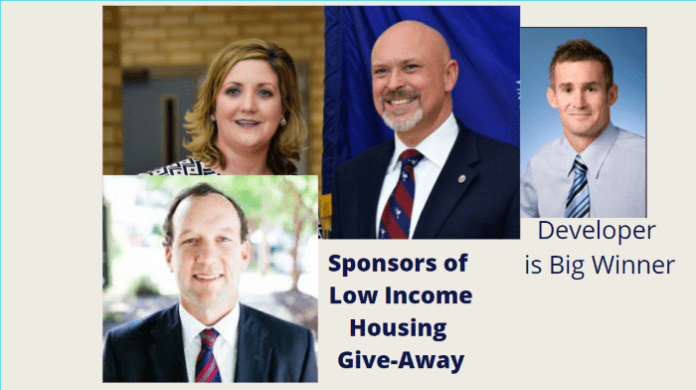 And just where will those $5.1 billion in tax credit monies go?

Bradley Development is a real estate development & consulting firm. We focus on creating quality affordable housing for communities, striving to do so with the largest ROI possible for our investors. We achieve this through strict adherence to the discipline of due diligence, consistent management practices & partnerships we’ve spent years cultivating.

THE $5.1 BILLION FINANCIAL BOTTOMLESS PIT OF A LAW WRITTEN LAST SPRING BY CLEMMONS AND COMPANY

HOW COULD SCORING MISS IT BY THIS MUCH???

When any new tax credit law is passed, it must be scored as to how much those credits will cost the state.

In a letter written this October to Grant Gillespie, Senior Legislative Advisor for Governor McMaster, Frank Rainwater lays out the huge fiscal liability this law has now created for South Carolina.

How could Alan Clemmons, Bruce Bannister, Heather Ammons Crawford, Murrell Smith, and Todd Rutherford (among others) miss the unintended financial consequences of this law by this much?

BIG PROPONENTS OF THE LAW

Sources close to this effort state Tony Denny, a Republican lobbyist, championed this idea to his Republican colleagues. Amber Setzler Barnes championed it among Democrats.

In a 2019 article written by MyHorryNews, Janet Morgan writes of Denny’s hire by Mayor Bethune of the City of Myrtle Beach: Some of the issues likely to be discussed in Columbia include small cell deployment, business license fee tax reform, affordable and workforce housing legislation, issues involving home rule and “the need for flexibility with hospitality fees and related hospitality tax bills,” according to a letter from Tony Denny of the firm.

Bannister has known ties to political operative Robert Cahaly of the Trafalgar Group, as well as, connections to Alan Clemmons.

The state allocations do not apply to the 4% tax credits annually, but 4 percent credits must include tax-exempt financing, approved through either the SFAA [State Fiscal Accountability Authority] or through carry forward allocation from the S.C. Housing Authority.

During the SFAA meeting on Oct 12, 2021, it was noted that the potential impact of the state housing tax credit is likely to greatly exceed the original impact expected by S.C. Housing and included in the fiscal statement for H3998, the enacting legislation.

Our original fiscal impact estimated an annual impact of $2,057,000 based upon historical tax credit allocations and discussions with S.C. Housing which was expected to increase annually to $15,969,000 by FY 2029-30.

Based upon [now] assumptions, the table below outlines the maximum potential credit outcomes per year:

Total liability through 2039 – $5.1 billion to the State of S.C. going directly into the pockets of low-income housing developers.