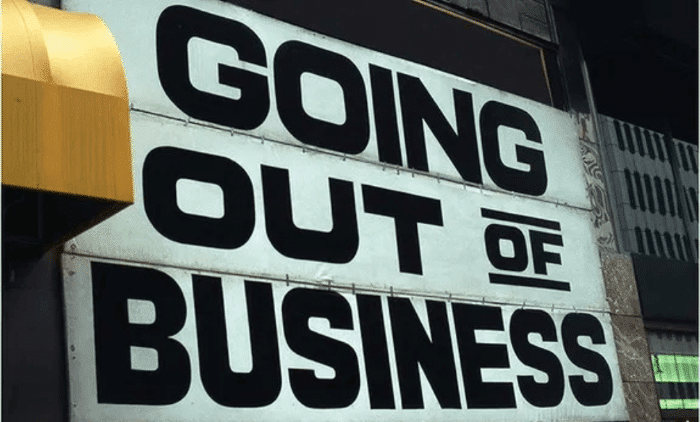 As we enter November, Horry County is just one month away from a New Year.

2020 was one of the hardest economic years in Horry County since the Great Depression of the 1930’s.

Looking back, these were the top five economic failures resulting from the pandemic, as well as, government regulations that affected normal business operations.

Steinmart in Surfside on Highway 544 closes in the next few days.

Steinmart joins a growing list of retailers, including Neiman Marcus, Brooks Brothers and Sur la Table, that have filed for bankruptcy during the Covid-19 crisis. Permanent national store closures announced by retailers in 2020 have also topped 6,000, according to a tracking by Coresight Research.

GNC and Victoria’s Secret are closing hundreds of stores as well. Coresight says retailers that were struggling to stay in business before the pandemic are unlikely to recover.

June 5th, the doors were found locked at Myrtle Beach’s Sticky Fingers. All that remained was an unanswered phone with the following voice mail. “We have explored many options to continue to serve our loyal customers, but these efforts have been unsuccessful, and we find that we must close this restaurant,” the voicemail stated.

As the Greenville News reported May 29th: 13% of S.C. restaurants had already closed their doors permanently by the end of May. And here’s the news that is yet to be decided — 70% of restaurateurs stated in late May that they couldn’t survive a second COVID-19 wave.

Local forecasters state that 32% of tourism related restaurants are expected to close in the next 5 months.

The parent of Outback Steakhouse, Bonefish Grill, Carrabba’s Italian Grill, and Fleming’s Prime Steakhouse managed to avoid layoffs and says its sales have been rebounding since statewide shutdowns forced most restaurants to close their dining rooms. Still, S&P gives the restaurant group a 13% chance of defaulting in the next year.

Dave & Busters is located at Broadway at the Beach. Considering Dave & Buster’s is somewhat of a Chuck E. Cheese for adults, it’s easy to see why the chain is struggling. The company has warned that bankruptcy is inevitable if it can’t reach a deal with its lenders and recently announced it will be laying off 1,300 workers. Second-quarter revenue was down 85% during the second quarter of 2020, and the company has been forced to shut down multiplayer games and reconfigure its arcades to allow for social distancing.

As we reported in September, a study from Coastal Carolina University’s Clay Brittain Jr. Center for Resort Tourism revealed a nearly 45% decrease in revenue Summer 2020 for Grand Strand hotels and resorts. While out of state condo owners took the brunt of those financial hits, these declines certainly affected City of Myrtle Beach tax revenues.

As we stated, declining tax revenues required the City of Myrtle Beach to retire or fire 53 workers in October. The announcement comes on the heels of a “financially dreadful” July and August for the city, City Manager John Pedersen told the Sun News, compared to a typical summer when the city is teeming with tourists spending money within city limits.

Cutting the salaries is expected to save the city $1.3 million, Pedersen said. The majority of the salaries come from the city’s general fund, which handles costs related to police, fire, street maintenance and other services, said Pedersen.

Pandemic aside, October turned out to be the deadliest October in the history of the city for downtown shootings. The Myrtle Beach brand continues its decline into free fall.

No one in Horry County took a bigger brand hit than the Myrtle Beach Area Chamber of Commerce.

Getting into a fight over health with your customers is usually not a smart move. As WPDE reported in late June:

The Myrtle Beach Area Chamber of Commerce President and CEO, Karen Riorden, said for other state leaders to blame South Carolina for their confirmed coronavirus cases is “ridiculous.”

“We don’t have any idea whether the people came from West Virginia or Ohio, they could’ve been ill on the way to Horry County. So, for all, we know they could’ve made some of us ill. It’s absolutely ridiculous that other neighboring states that are also battling COVID-19 would be blaming the fair state of South Carolina or the Grand Strand for the illness that’s befallen their constituents,” Karen Riordan said.

While six state governors did warn their residents that Myrtle Beach was a destination hot spot, MBACC has also been riddled with questions about the type of clientele it attracts to downtown Myrtle Beach for more than the past 5 years.

The MBACC budget has grown to a bloated $53 million. Meanwhile, unlike few other non profit organizations, MBACC continues to struggle in growing Myrtle Beach’s downtown business.

Small business owners continue to question why MBACC puts its highest paid vendors on its Board of Directors. Several believe that is the organization’s central conflict and why it is so ineffective.

The fact that MBACC has been unable to spot the inherent conflict of why having tech and media vendors (that MBACC pays millions to annually) on their board is a mystery. When MBACC wants to put out new tech bids, media bids or change vendors, do they ask permission from their board?

That decision alone may have compounded the declines experienced by numbers 3 and 2 on our list here.